How the Heart Became the Symbol of Love, Lust and the Soul

For thousands of years, this vital chest muscle has represented the feelings center of emotions, spirituality and romance. Here's how we got here, and why cardiologists say it's not so far-fetched. 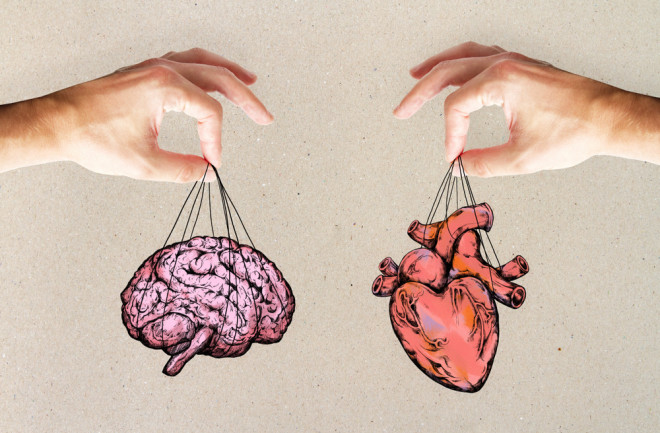 You can have a heart, and you can lose it. You can leave it in San Francisco. Or, you can suffer from heartache, and you might get a toothache from all the sentimental heart-shaped candies that emerge each February. That’s an awful lot of emotion for an organ that is, essentially, a big muscle.

Over the years, the heart has gone from being the body’s nerve center, to the symbolic home of the soul, and to a biomechanical marvel. Its journey tells us a little about the way we view the world and our place in it. (Meanwhile, the origins of the classic cleft-heart symbol for love are still debated.) Many of us have been taught that ancient Egyptians thought the brain was worthless, that their embalmers scooped it out through the nostrils of a mummy-in-progress and threw it away. The heart, meanwhile, was preserved in an alabaster jar so that in the afterlife, it could be weighed against a feather to determine the fate of its owner’s soul. But the truth about how the ancients viewed the heart versus the brain, as you might expect, is a little more complicated.

An Egyptian medical text dated to around 1600 B.C. alludes to the brain’s importance. It mentions head injuries and some of the problems that could ensue. “They clearly let you know that they think this is the center of your motor functions,” says Brad Bouley, a historian at the University of California, Santa Barbara. So it’s not that the ancient Egyptians thought the brain didn’t do anything; it just didn’t matter as much as the heart.

Ancient Greek and Roman philosophers similarly considered the heart of utmost importance.  Aristotle, in fourth century B.C. Greece, posited that the heart was the source of life and the center of the nervous system. About 500 years later, the Roman physician Galen argued that nerves are connected to the brain. But they agreed on a crucial point.

“Both Galen and Aristotle believe that our emotions, all this sort of stuff, is governed by our humors,” Bouley explains. This refers to blood, phlegm, and black and yellow bile. Since the heart was believed to churn and heat the blood, it could affect your emotions. “Galen and Aristotle both believe that your heart’s not only sort of a center of the soul, but it’s also something that very much affects how you’re feeling and how you’re reacting to things,” Bouley adds. Since Galen believed that semen was superheated blood, that also meant the heart also played a role in sexual love. In Galen’s view, “when a man has sex, he’s so impassioned, so heated, he whips his blood into this froth,” Bouley says, “like an espresso machine.”

In addition to its relationship to the four humors, the heart as the seat of emotion made symbolic sense. “Why does the heart take on such special meanings?” says Paula Findlen, a historian of science and medicine at Stanford University. “I think that is not only a matter of anatomy and physiology, but it's also about cultural belief.”

Findlen explains that philosophers like Aristotle and Galen accepted a hierarchy of the body, with organs like the genitals and the liver tied to physicality while the brain was the seat of reason and logic. The heart, which was physically located in between, bridged the gap: “Love is both physical and metaphysical, and the location of the heart proves that, because it is between the liver and the brain.”

The heart’s role as the seat of the soul translated into religious significance. In Europe during the Middle Ages, people believed that goodness and holiness could be physically manifested in the body, particularly in the heart. Upon the death of a person who was deemed holy and therefore could potentially be a saint, says Findlen, one of the first steps, along with collecting reports of miracles attributed to them, was “to dissect their body to find signs of sanctity.”

In 1308, when Clare of Montefalco, a nun who reportedly had holy visions, died, her body was dissected. The story goes that inside her heart were tiny religious symbols, including a crucifix: positive proof of her holiness that aided in the campaign for her canonization as a saint. By the 16th century, the physical signs of sanctity were less extreme than religious symbols miraculously inside people’s bodies. For instance, an enlarged heart could be physical proof of good works, sort of like a Renaissance Grinch whose heart grows three sizes based on how much love he harbors.

During the Renaissance, European scientists made huge steps in understanding the heart, in part thanks to dissections. Leonardo da Vinci produced detailed anatomical drawings and even created a glass model of the heart to better understand its function, and his findings began to veer away from Aristotle and Galen. In 1628, the English physician William Harvey published an account describing how the circulatory system works. After that, Harvey’s model dominated medical discussions of the heart, and the heart as emotional center began to fade, at least in the realm of science.

Language and literature helped the heart maintain its symbolic role in Western society. Writers like Shakespeare and Dante, and the poets they influenced for centuries onward, set a sort of standard for modern notions of love and intimacy. Their descriptions of the heart have lingered, too. Still today, notes Findlen, “You don't say, ‘Oh, my mind is shattered,’ even though your mind may be shattered. You say, ‘I'm just heartbroken.’ ”

It’s worth noting that while the heart has been seen as the home of the soul in many cultures, this role isn’t universal. “In different cultures, different parts of the body receive a lot of attention,” says Hugh Shapiro, a historian at the University of Nevada, Reno. “The kidney in classical Chinese medicine is profoundly important. In fact, I would say it's the most important organ” because of its role in regulating chi, which represents life energy.

And while the European understanding of the heart has greatly influenced Western society, cultures around the world have made breakthroughs on how the heart works. “When Europe was in the Dark Ages, the Islamic culture and science actually was flourishing,” says Nasser Khan, a cardiologist at The Iowa Clinic. “Ibn Sina was one of the Islamic physicians. He first thought that maybe the heart has a different function” than the center of the soul described by Aristotle and Galen.

In some ways, though, the ancients were right: Emotion isn’t relegated solely to the brain, and our psychological well-being affects our whole bodies, including our hearts. One surprisingly common connection between the heart and emotions is called takotsubo cardiomyopathy, or broken-heart syndrome.

In broken-heart syndrome, when a patient experiences severe emotional distress, they literally feel it in their heart. Their hormones surge and the heart’s left ventricle swells, taking on a rounded shape like a tako-tsubo Japanese octopus trap, hence the syndrome’s official name, which causes it to pump blood less efficiently. “The apex of the heart really bulges and doesn’t move, and patients present with acute chest pain, shortness of breath, kind of like a heart attack,” Khan says. “But when you do an angiogram, you find their heart arteries are fine, no blockages.”

In his practice as a cardiologist, Khan says that he sees patients with broken-heart syndrome once or twice a month; they can be treated with drugs to improve heart function, like ACE inhibitors and beta blockers. Broken-heart syndrome, Khan says, makes it clear that while we may no longer see the heart as the seat of emotion, “they're unbelievably interconnected, the mind and body go hand in hand.”