How a 19th-century medical specialty added to our knowledge, saved lives — and vanished from the face of the Earth. 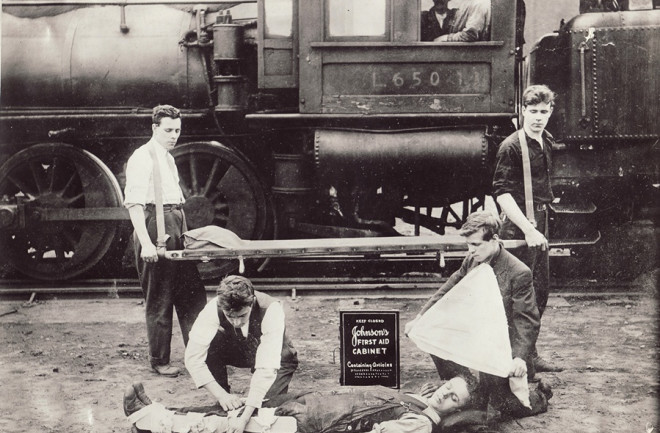 For rail workers and passengers of the 19th and early 20th centuries, train travel — while miraculous for the speed with which it carried people across vast distances — presented ghastly dangers. Brakemen commonly lost hands and fingers in the hazardous coupling of cars. Exploding boilers released high-pressure steam that scalded stokers. Passengers were maimed or crushed when trains jumped the tracks, or telescoped into tangles of wreckage. And in the hours they spent aboard, travelers and workers suffered heart attacks, strokes, seizures, all the health hazards of daily life, but far from their family doctor — or sometimes any doctor. One in every 28 railroad employees was injured on the job in 1900 — and 1 in 399 died.

These grim statistics helped spark the development of a new medical specialty during the Victorian Era: railway surgery. Physicians in this field focused on the injuries and maladies specific to workers and passengers. Eventually, railroad companies would open hospitals close to the tracks in remote locales otherwise without medical facilities. Professional organizations arose that furthered railway-related medical knowledge and investigated new avenues of preventive medicine. And within a century, railway surgery met its own untimely end — but its influence continues today.

“This is really the birth of trauma care,” says Ryan Stanton, an emergency medicine physician at Baptist Health Lexington in Kentucky and a scholar of activity-based event medicine, which he practices at NASCAR races. “These folks took their medical knowledge and expanded it with the unique challenges of railroading. It’s the root of emergency medicine and what sets our specialty apart from primary care.”

A wood carving depicts the aftermath of a passenger train breaking through a bridge on the Maine Central Railroad in August 1871. Granger, NYC — All Rights Reserved

Among the first railway physicians was an Erie Railroad doctor, name unknown, contracted to treat injuries in 1849. Within a few years, lines such as the Illinois Central, Michigan Central, and the Chicago & Milwaukee had recruited their own physicians. By the start of the Civil War, many railroad companies had surgeons and other medical personnel on staff.

But having trained professionals at the ready solved only half of the problem: These railroad physicians often had to treat their patients wherever they could, in less than ideal circumstances — dirty houses or hotel rooms along the tracks. Poorly treated customers and workers could turn into costly legal liabilities and unfilled shifts, so the railroad companies soon began organizing hospitals and hospital associations. The Central Pacific opened one of the first, in Sacramento, Calif., in 1870; by 1883, 20 percent of the patients were treated for crushed limbs, and many of them needed amputations.

Decades later, at their peak, about 35 railway hospitals had opened in the U.S. These included the Southern Pacific’s 450-bed hospital in San Francisco, the second medical facility in the country to operate an intensive care unit — a specialized approach to treatment much needed by maimed railroaders. Other rail systems contributed to existing hospitals on their routes, or set up mutual benefit associations for workers that covered the treatment of injuries. This was long before other industries considered providing health care services to employees.

So expansive were these railway medical systems that in 1896, just one railroad, the Missouri Pacific, treated more than 29,000 patients in its medical system and clinics, comparable to major metropolitan hospitals. “The direct descendants are employer-based insurance and employer-based health care,” says Stanton. “A lot of the larger corporations still do that. They have a medical center and a medical staff inside the factory that does the initial evaluation before getting patients out to the emergency room or hospital. What’s come out of railway surgery is our current employee-based occupational health system.”

As their numbers increased, railroad physicians drew together, forming the National Association of Railway Surgeons, which began publishing a medical journal, The Railway Surgeon, in 1888. At the group’s annual meeting two years later, members discussed relevant medical matters such as the sanitary inspections of rail cars, the dangers of alcohol and tobacco, and injuries to the spine, among other topics. That association eventually grew to 1,500 members, about a quarter of the active railroad doctors. Practitioners soon began publishing textbooks and guides to railway surgery, giving the new specialty greater legitimacy.

Railroad doctors needed all the credibility they could get. Railway surgeons were paid by the railroads and evaluated patients filing injury claims against the rail systems, so patients and even fellow physicians suspected their medical judgment might serve their employers’ interests. Could railway physicians give unbiased testimony in court, or diagnose and treat patients without weighing the business consequences of their decisions? As in all professions, some were honest, and some weren’t.

Most railroad doctors, for instance, would not recognize a condition called “railway spine,” an outcome of rail accidents from which workers and passengers claimed back injury without visible damage to their bodies. Railway surgeons commonly viewed the claim as a form of fraud. “Sympathy for the injured and popular sentiment against wealthy corporations evolves suggestion, and prospective damages excites auto-suggestion,” one surgeon for the Erie Railway coldly wrote in 1894.

“Most likely it was a basket diagnosis that held multiple back-related problems, limited by the technology of the time,” Stanton says. “In medicine, we are only as good as the tools and knowledge that we have.”

Examples from an 1899 handbook for railway surgeons provided instruction in medical techniques and railroad hazards, such as this image of the inside of an operating room during the amputation of the thigh by “the circular method”. Railway Surgery, A Handbook on the Management of Injuries, by Clinton B. Herrick, William Wood and Company, 1899

A Lasting Legacy Despite the suspicions against them, railway surgeons helped pioneer many methods of examination and treatment now commonplace in occupational and emergency medicine. They reported in the medical literature on a wide range of traumatic injuries, from broken limbs to ruptured organs to trauma-induced deafness, plus the treatment of typhoid and other serious diseases of the era.

Railway surgeons also performed preventive vaccinations on workers at risk of contracting malaria, smallpox and typhoid. They advocated for cleaner, better-ventilated cars supplied with pure drinking water and free of clearly sick people. (One went on record to complain of a passenger with tuberculosis who wiped his mouth with the window drapes of a coach.)

In addition, these were among the first physicians to make workplaces safer by administering pre-employment physical exams and testing worker vision and hearing. Railway surgeons broke ground in the diagnosis of colorblindness, a cause of fatal accidents when impaired workers failed to correctly see colored signals and lights. These doctors assembled care packs for use in the field, jammed with supplies and dressings, presaging the modern first-aid kit, and some railway surgeons trained workers in common first-aid techniques.

Compared with most people in the U.S. at the time, railroad employees had superior medical care and more doctor attention, including access to a variety of specialists.

Railway surgeons had become so essential in America’s health care system that by World War I, they accounted for 10 percent of the country’s physicians and provided care for 2 million rail employees. Yet circumstances would push their medical specialty into obscurity and irrelevance within a few years of the war’s end.

By the 1920s, many small towns and remote areas had their own hospitals, ending the need for specialized railway medical clinics. Increasingly covered by private medical insurance, workers and passengers insisted on seeing doctors of their own choosing. Eventually the salaries of the doctors and staff, and the upkeep of specialized hospitals, burdened a rail industry already beleaguered by competition from automobiles, trucking and airplanes.

A few of the railway hospitals remain standing, many of them repurposed as facilities in today’s health care systems. The Frisco Railroad’s hospital in St. Louis now operates as a nursing home, and the Southern Pacific’s hospital in Houston currently serves as an HIV/AIDS clinic in the Harris Health System. Even more lasting, though, has been railway medicine’s mark upon contemporary health care. It’s unlikely that any of us today would think of railway surgeons when reaching for a first-aid kit, taking a vision or hearing test or submitting to a vaccine.

“In this era, physicians were the handymen of health care. They did a little of everything,” Stanton says. “Whether we know it or not, the railroad physician lives on in providers who gain extra knowledge and skills to work with a particular high- or unique-risk occupational population.”

The train may have passed, but the whistle still echoes.

[This article originally appeared in print as "Doctors Derailed."]