Lessons from past outbreaks could clue us in to the way out of COVID-19. 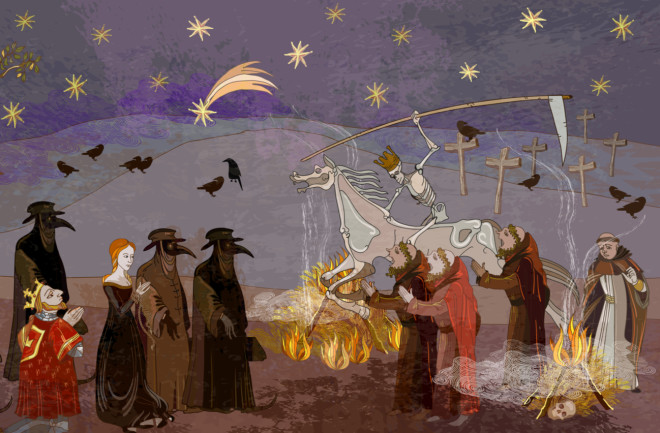 Since 2020, quarantining, hunting down at-home tests, and social distancing have become the “new normal” as we grapple with COVID-19. One-third of surveyed Americans said their routines were disrupted by the pandemic, and 23 percent reported that their work life was negatively impacted.

For many Americans, COVID-19 represented their first major public health crisis. Experts estimate that a life-altering pandemic has a 2 percent chance of occurring each year, meaning that today’s young people might eventually face another round of masking, standing 6 feet apart, and waiting anxiously for a test result.

Disease-driven disruptions to our daily routines is a rarity in the modern world. But for people living in previous centuries, outbreaks were far more common. During the Middle Ages, for example, people endured outbreaks of dysentery, influenza, malaria, smallpox, syphilis and typhus.

By studying past pandemics, scholars can glimpse trends that might indicate how fatal outbreaks finally come to an end and determine when, or if, COVID-19 will pass and allow daily life to return to normal.

Pandemics have existed ever since humans transitioned away from a clan-based nomadic existence. At that point, people took on an agrarian lifestyle and raised livestock such as poultry and pigs, which exposed them to the diseases carried by such animals.

The Justinian bubonic plague, for example, emerged in the sixth century and raged through parts of the Middle East, North Africa, and the Mediterranean. The disease spread throughout the region as ships transporting grain also carried flea-ridden rats that harbored the Yersinia pestis bacterium.

As cities increased in size and filth proliferated, sanitation-related pandemics grew: The cholera pandemic, for instance, spread around the globe in the mid-1800s and was transmitted through contaminated food and water. In London, a tainted public water well was responsible for killing more than 600 people. This pandemic ended only after medical authorities realized the disease came from the well, not “bad air.”

But for other pandemics, the devastation lasted years and saw deadly resurgences — indicating it never really left.

Living With the Plague

The second wave of the bubonic plague, also known as The Black Death, killed an estimated 30 to 50 percent of the European population in the mid-1300s. Contracting the flea-driven disease meant certain death, and the mortality rate exceeded 80 percent.

The disease simmered down but reemerged in select areas, only to recede and then crop up in a new locale a decade later. This cycle continued for centuries. The last known major European outbreak occurred in Marseilles in 1723.

“The lesson is that when it was over, they didn’t know it was over. For hundreds of years, they kept prepping themselves for the next outbreak,” says Dorsey Armstrong, a professor of English and medieval literature at Purdue University.

Outbreaks killed entire families and emptied villages, Armstrong says. At the time, people didn’t realize the disease was carried by fleas that lived on rats. When host rats were unavailable, the infected fleas made their way to humans. So any change in equilibrium within the rat population meant a resurgence of fleas looking for new hosts to bite.

A third wave of the plague occurred in Asia in the 19th century, and Armstrong says the disease is now endemic in parts of the world but treatable with antibiotics if diagnosed early.

Fortunately, modern medicine has eradicated or mitigated plenty of other diseases that once ravaged the globe. Vaccines, for example, ended polio in the U.S., and smallpox raged for centuries before it was eradicated in 1980 by vaccines. The introduction of antibiotics helped contain syphilis. Cholera and typhoid were also mitigated by antibiotics, as well as improved sanitation. And although malaria is still in many countries, treatments help reduce fatalities. In recent years, however, scientists have detected drug-resistant parasites.

As for the H1N1 pandemic, which was first reported in April 2009 and had infected 1 million Americans by June, vaccinations and antiviral medicines paved the way out. A jab was made readily available that fall and the crisis was considered over by the end of summer 2010.

Although vaccines are available in many parts of the world for COVID-19, mutations in the virus have prompted public health officials to wonder when the disease will become endemic. Some experts hope that process will begin after the omicron variant wanes. But as history indicates, it can be hard to predict a pandemic’s course while still in its midst.

“We have no idea, are we in the middle of this ride? Are we near the end? Or has it just started? We won’t know until some years after Covid ends, or if it transfers to something less lethal,” Armstrong says.

More From Discover
Health
Will COVID-19 Need an Annual Vaccine Like the Flu?
Health
What New Variants Of COVID-19 Are Currently Circulating?
Planet Earth
What is the Doomsday Clock and Why Should You Care?
Health
Here's Why Coronavirus Cases Are Surging in China
Health
Scientists Say Corpses Can Carry and Spread COVID-19
Health
How COVID-19 Developed in 2022 and What to Know for the Coming Year
Recommendations From Our Store
My Science ShopDiscover STEM Kits
My Science ShopDiscover 2022 Calendar
My Science ShopStrange Science
My Science ShopElements Flashcards
Shop Now
Stay Curious
Join
Our List