How One Strain of Plague Bacterium Ravaged Eurasia 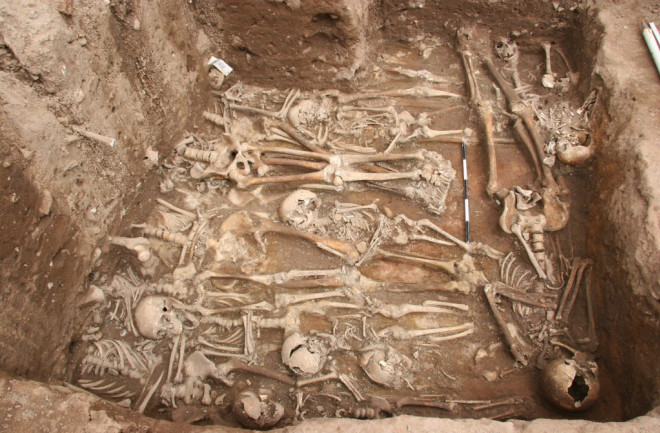 A mass burial site in Ellwangen, Germany. (Credit: Rainer Weiss) Even today, the specter of the Black Death looms over society. The disease, caused by the bacterium Yersinia pestis, began a deadly march through Eurasia starting in the mid-14th century, killing hundreds of thousands along the way. And researchers from the Max Planck Institute for the Science of Human History believe that a single strain of the bacterium is to blame, and it remains the source of modern plague epidemics. The disease was likely introduced in Europe via fleas that had feasted on infected ship rats. Symptoms of the Black Death were first reported in port cities on the Mediterranean, and it spread quickly from there. Whole villages were nearly wiped out, and in total, some 60 percent of Europe's population would succumb to the disease, which was characterized by an extreme swelling of the lymph nodes and the gradual blackening of the fingertips and toes as the tissues died. Many of those infected died within a week.

Piecing Together a Pandemic

For decades, researchers have attempted to piece together the trail of death that Y. pestis left behind as it spread throughout the continent. Chief among their questions is whether the string of outbreaks that followed the Black Death were a result of new waves of the pathogen entering from China, or if the disease went through periods of dormancy, only to flare up anew when the conditions were right. In 2010, scientists definitively identifiedY. pestis as the bacteria responsible for the Black Death and other plagues, but it's still not known whether different forms of the disease struck at various times.

A microscopic view of the Yersinia pestis bacteria. (Credit: CDC/ Courtesy of Larry Stauffer, Oregon State Public Health Laboratory) In a new study, scientists analyzed DNA from different grave sites throughout Europe to compare strains of the disease. They found evidence to suggest that the blame for the four hundred years-long series of outbreaks that followed the initial pandemic can be laid squarely at the feet of a single strain of Y. pestis. They say the strain that was first introduced to Barcelona via merchant ships went on to ravage the continent for centuries. The researchers gathered DNA samples from mass graves sites in Barcelona, one of the first major cities to be hit; Bolgar City in eastern Russia, where the plague manifested itself slightly later; and Ellwangen, a city in Germany where another outbreak of the plague emerged over a century later. The sites in Barcelona and Bolgar City were dated to the mid- to late-14th century, while the Ellwangen site was dated to between 1486 and 1627. The researchers discovered pieces of Y. pestis DNA in 32 individuals, of which three were still complete enough to conduct a genome-level analysis. They then compared their findings to previously-sequenced samples of the bacteria from London and Marseilles.

By looking at how the disease mutated over time, the researchers placed their findings on the Y. pestis phylogenetic tree, a historical record of how species mutate and change over time. They found that the strain that entered Barcelona was identical to the form of the disease that struck London around the same time. The strain of Y. pestis that arose in eastern Russia also bore strong similarities to the London strain, although several small mutations had arisen by this point. Moreover, the samples they took from Germany and Marseilles, which belonged to later outbreaks of the disease, were directly related to the same strain. They published their work in the journal Cell Host & Microbe on Wednesday.

An illustration showing how the Black Death likely spread. (Credit: Spyrou et. al) This was a key finding, as researchers believe it adds credibility to the theory that the disease lay dormant for decades at a time in Europe before flaring up anew. It was previously thought that subsequent outbreaks of the disease stretching from the 14th century all the way to the 18th century were caused by new invasions of rat-borne bacteria. Demonstrating that a single strain led to four centuries worth of outbreaks suggests Y. pestis went into hiding, biding its time until conditions were ideal to strike again.

With this information, the researchers broadly mapped how this single strain moved throughout the continent. After entering southeastern Europe, the disease traced a wide arc that led into Russia. The researchers hypothesize that the deadly strain eventually completed a rough circle, re-entering Asia and causing the third major reappearance of the plague in the 19th century. As the disease traveled, it would sow the seeds of future outbreaks — descendants of the original strain which lay dormant in animal hosts for decades at a time. There were dozens of subsequent outbreaks, although none was as widespread as the original pandemic. Even in recent years, the plague has occasionally reared its head, although we are much better at treating it. The CDC reported 362 cases of human plague in the U.S. between 1944 and 1993, mostly in the Southwest. In addition, a small outbreak was reported in Madagascar in 2014. It is likely that these flare-ups can trace their roots all the way back to the Middle Ages.