How Humans Evolved to Throw a Fastball 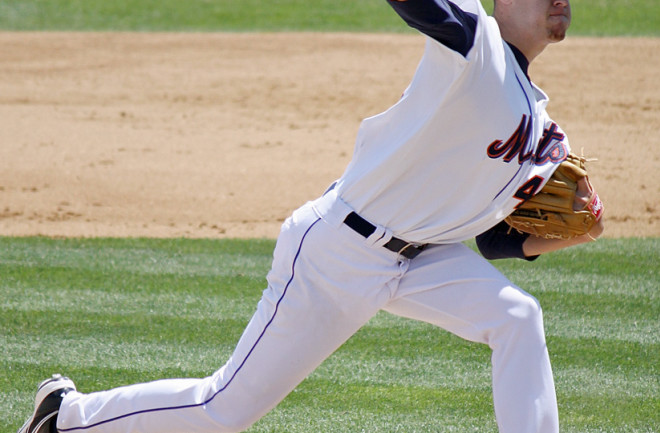 Binghamton Mets' pitcher Zack Wheeler throws a pitch. Credit: Richard Paul Kane / Shutterstock Pitcher Aroldis Chapman of the Cincinnati Reds routinely throws screaming 100 mile-an-hour pitches---for which he owes credit to a shift in anatomy that occurred about 2 million years ago. In a study published today researchers have determined how humans are able to throw so fast and so accurately. By using motion capture to study the movements of baseball players' arms, the team pinpointed the anatomical changes that created modern humans' strong throw, and they traced the origin of these changes back to Homo erectus.

Mechanics of the fastball

Neil Roach of George Washington University and colleagues recruited 20 players from the Harvard baseball team to construct 3D imaging of the legs, hips, torso, elbow and shoulder from the beginning to the end of a throw. Roach knew from previous work that the human throw was something distinctive. He had earlier studied throwing mechanics in a group of retired Hollywood chimpanzees and found that, while they can throw with accuracy and are able to toss balls overhand and underhand, their top speed is just 20 miles per hour. Chimps’ shoulders are shortened, rising up toward the head, while human shoulders are more relaxed. The researchers used the motion capture data to construct a computer model of the physics at work. They found that the key was elastic energy. This energy is stored in stretched ligaments and tendons when the arm is cocked. When the arm is released, the upper arm rockets around and the force causes the elbow to straighten and deliver the ball at high speed. And they determined that this shoulder rotation is actually the fastest motion of the human body. Professional pitchers can reach a rotation of 9,000 degrees per second. At that speed, if the arm could rotate a full 360 degrees it would complete 25 rotations in one second. http://www.youtube.com/watch?feature=player_embedded&v=Jq6dCFCMGq4 Video courtesy of Nature Video

While these body mechanics thrill baseball fans today, they also were crucial to intensifying the hunting ability of ancestral humans. To replicate our ancestors' throwing abilities, the researchers outfitted the baseball players with modified braces that restricted their torso and shoulder rotations. As predicted, limiting elastic energy resulted in slower angular acceleration of the arm and a slower throw. The three anatomical shifts in the upper body that are responsible for modern humans' fastball, then, were located in the fossil record and found to have evolved in concert around 2 million years ago. The authors suggest that better throwing skills were an advantage in hunting. In turn, better hunting skills meant diets and lifestyles shifted dramatically and may have contributed to the rapid expansion of bodies and brains between 2 million and 200,000 years ago. “We really don’t have any other evidence as to how that hunting was accomplished. We do know that hunting was intensive and a huge part of our biology,” Roach says. He says the next step is to examine the effectiveness of early projectiles, such as pointed wooden spears as well as rocks. The research is published today in the journal Nature.