How Human Connection Affects Our Hearts and Hormones

Science is showing us that our social ties play a vital role in our health. 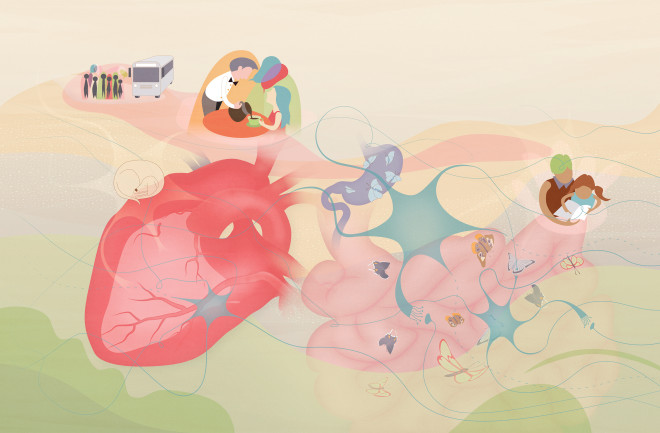 Joanie Simpson arrived at the hospital by helicopter. She had intense chest pain — exhibiting the classic signs of a heart attack. Doctors immediately threaded a catheter into her heart, expecting to find blocked arteries that they would have to prop open with stents. Instead, they were startled to discover that her arteries were “crystal clear.”

Switching gears, the doctors quizzed Simpson about whether she’d had any unusual stress in her life. Sure enough, she cited a number of recent family and financial stressors. And, most devastating of all, she’d watched her dog, a pet that she’d loved and treated like a child, die a painful death the day before. She took it hard. So hard, in fact, that it interfered with the function of her heart muscle. It almost killed her.

In 2005, a study published in The New England Journal of Medicine (NEJM) confirmed that in some cases, an intense flood of stress hormones could stun the heart, essentially producing a heart attack. Just over a decade later, Simpson’s case was written up for NEJM as well, settling the debate over whether or not “broken heart syndrome” was real.

In an interview with The Washington Post, Simpson was quoted as saying that she “takes things more to heart” than other people. We think of phrases like this as being simply metaphors, a playful use of language, but they can be much more. Sometimes, these metaphors can reflect real symptoms — something going on inside of us. Those hormones flooding through Simpson’s heart were a physical response to her mental stressors.

It’s becoming increasingly clear that our biological responses to the outside world are stronger than we once thought. And it’s not all negative: Hormones associated with love and social connections can light up our nervous system and give us a health boost. The results run deep in the body, down to the very rhythm of our hearts.

When we experience feelings of love and connection, our brains release a cocktail of hormones and chemicals. Attraction, romantic love, platonic love and social connection all come with a specific mixture of hormones, but most involve some combination of dopamine, testosterone, estrogen, vasopressin and oxytocin.

So what controls the release of this “love medicine”? The most powerful neural network in the body, called the vagus nerve.

Vagus is Latin for “wandering,” and, in line with its poetic name, the vagus wanders everywhere through your body. It exits the brain stem at the base of your skull, deep in your neck, and runs down near the carotid artery. From that spot, it shoots down to your heart and beyond, where it regulates heartbeat, lung function and digestive flow, among other vital systems.

Think of those pneumatic tube systems banks have — you put your deposit envelope in the little canister, and it whooshes away. Now imagine that happening in the vagus nerve, up and down, passing messages between mind and body millions of times over the course of a day.

Eighty percent of the vagus pulls information up into the brain, while the other 20 percent sends information down into the body. It’s a rapid, constantly flowing system that allows your heartbeat, breathing, digestion, endocrine system and immune system to constantly adjust and respond to all the signals passed to and from the brain.

With the vagus as the connecting cord, emotions flood through our systems in the form of neural messages and hormones. How often do we use the phrases “gut feeling” or “broken heart,” or tell someone we have butterflies in our stomach? We feel different emotions in different parts of the body for a good reason: Our hearts, guts and stomachs are hotbeds of neuroreceptors. And when we experience feelings of love and connection, our vagus nerve is set ablaze with positive signaling.

Barbara Fredrickson, a psychologist  at the University of North Carolina at Chapel Hill, has immersed herself in research on the link between the vagus and social connections for over two decades. She’s run study after study showing that what strengthens the neural highway is small moments of positive interaction — a sort of “falling in love,” if you will — with the people who surround you on a day-to-day basis. That means everyone, from your spouse and children, to the barista you’re getting to know at your corner coffee shop.

Fredrickson believes that culturally, we underestimate these fleeting moments. To her, love is a series of “micro moments of positivity resonance” that we experience, over and over again, as we go through life. We may have just one of these interactions with a stranger at a bus stop; or a million of them over the course of a lifetime with the person we marry.

Her research was fresh in my mind one morning as I was walking to a meeting along the streets of Cambridge, Massachusetts. I zoomed by person after person who didn’t meet my gaze as we passed on the redbrick sidewalk. But as I crossed over the Charles River on a busy bridge, I fell in step next to an older woman pushing a baby in a stroller. We fell into an animated discussion of children, families and life with babies. I found myself remembering the years when my kids were infants and the difficulties and joys of that time.

These moments are more important than we realize. While I was talking with this grandmother, whose name I never even caught, I was wrapped up in our conversation, laughing, making eye contact. And when we arrived at the building, it seemed like the long, cold walk had flown by. I realized that in that fleeting conversation, I’d experienced a real moment of bonding with someone, and “exercised” my vagus nerve in the same way I work out my leg and heart muscles when I go for a run.

We think of the love we share with a spouse as being the most important love out there, and in certain aspects — socially, culturally — it is. But when it comes to our health and biological systems, any brief, positive interaction — whether it’s with your spouse, a friend or an Uber driver you just met — can be equally as important as the next and carries the same weight.

Fredrickson ran a study in which participants signed up to practice a certain type of meditation called loving-kindness meditation, or LKM. People were randomly selected from a pool of volunteers to take a six-week course in LKM, which focuses on training participants to cultivate feelings of love, compassion and goodwill toward themselves and others.

Participants were then asked to practice the meditation tactics they’d learned at home, whenever they wanted, for however long they wanted. Then they gave the researchers daily reports on both their meditative activity and their social interactions on that day.

The team tested their subjects’ vagal tone, or strength, before and after the study. They found that as study participants’ positive emotions increased through LKM, so did their social interactions. And as the number of social interactions went up, so did vagal tone. The higher the subject’s vagal tone was when they started, the more it increased over the course of the study.

But quite the opposite happens when we neglect to interact with other people. That upward spiral of positivity in well-connected people becomes a downward one in those who spend too much time in isolation.

An Epidemic of Loneliness

A 2016 review of 28 studies showed just how deadly it can be if you’re cut off from social interactions. Researchers looked at data from over 180,000 adults who were lonely or socially isolated — defined as dissatisfaction with social relationships or having few social connections, respectively. They found that loneliness, social isolation or both were associated with a 29 percent increased risk of heart attack and a 32 percent greater risk of stroke. People who reported fewer social connections also showed disrupted sleep patterns, altered immune systems, higher inflammation and greatly increased levels of stress hormones.

These numbers are startling when you consider the number of people who could be affected. In the U.S., one-third of those over age 65 live alone, as do more than half of the 1.6 million people who live in Manhattan. In the U.K., sociologists saw a marked increase in the number of people living alone over the course of a decade; between 2001 and 2011, it went up by 600,000 people, a 10 percent rise.

John Cacioppo, a social psychologist at the University of Chicago, studied loneliness for over two decades before his death in 2018. In one study, he found that lonely or isolated individuals had an increased risk not only of heart disease and stroke but also cancer. And he and his research partner, psychiatrist Steven Cole of UCLA, observed in a 2015 study that immune system cells in lonely individuals were altered right down to the expression of their genes.

In other words, there was a notable change in the way the cells of the immune system behaved in lonely individuals versus those who had more opportunity for genuine social connection. In lonely individuals who viewed the world more as a threat, the cells of the immune system became more inflammatory. That meant more cells were constantly cycling through the body looking for something to fight, like an army unit always on patrol with no break.

Cacioppo’s research also found that loneliness is contagious and heritable. It can spread from a lonely person as they cease to make eye contact and interact, and those changes in gene expression can be passed down to your offspring. Loneliness affects 1 in 4 people — an epidemic indeed — and increases your risk of an early death by 20 percent.

As Cacioppo put it in a 2016 interview with The Guardian, if we were to build a zoo for the human animal, we would include the instructions: “Do not house in isolation.”

From Cured by Jeffrey Rediger, M.D. Copyright © 2020 by the author and reprinted by permission of Flatiron Books.