How Germy Are Airplanes?

Viruses and bacteria can persist on airplane surfaces for days, researchers find. 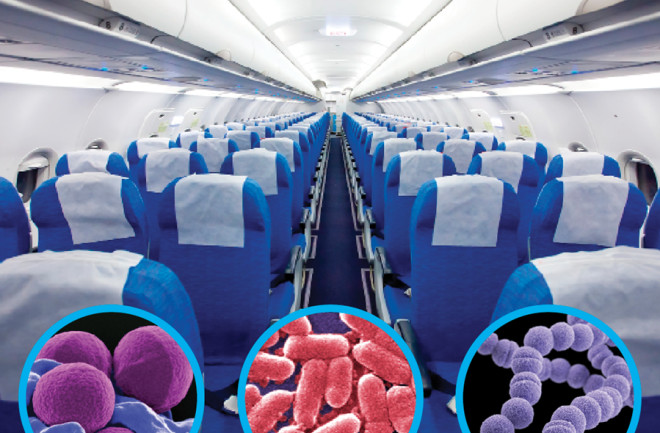 Missed connections and lost bags might not be your biggest worry when traveling. Researchers have found that nasty, contagious bacteria can last for days on airplane surfaces.

What they found was disturbing. MRSA lasted for 168 hours, or seven days, on seat pockets (where travelers reach for magazines and store their iPads), while E. coli samples thrived for up to four days on armrests. Barbaree and Vaglenov rubbed pig skin on the tainted surfaces to mimic contact with human flesh. They found that the less porous the surface, the more transmissible the bug.

Bacteria survived longer, however, on more porous surfaces, such as seat pockets, though they were much less transmissible than those on, say, a tray table.

The researchers are now performing the same tests on Streptococcus pyogenes, which causes strep throat. They also are testing cleaning agents that might help prevent bacterial stowaways.

For now, Barbaree says regular hand-washing is probably the best way to prevent the spread of disease. He says he and his wife now take alcohol wipes with them on flights.

And the next time you’re waiting to get on a plane, ponder this: There are no federal cabin-cleaning regulations.

[This article originally appeared in print as "Hitching a Ride."]