How Does Male DNA Get Into a Woman's Brain? 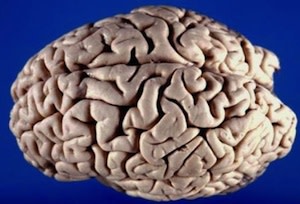 Some women always have men on the brain. And some women literally have men in their brains. A new study in PloS ONE

found that quite a few female brains contain male DNA. This genetic material presumably passes into a mother while she is pregnant with a male fetus. Although we already knew that fetal cells can enter a mother's body

, until now, it was unknown whether the cells could pass into the brain as well, because the blood brain barrier

normally blocks large molecules and foreign substances from entering the brain. To explore the possibility of brain microchimerism

---the presence of genetically distinct cells in a host's body---researchers examined autopsy specimens from 59 deceased female subjects, who either had no neurological disease or had suffered from Alzheimer's. The scientists found that 63 percent of the brains contained male cells distributed throughout the organ, and that this microchimerism did not fade away over time: the brain of one 94-year-old woman still contained male cells. And interestingly, the brains of subjects with Alzheimer's disease were less likely to contain male DNA, and when they did, they generally had less of it than the healthy brains did. These results suggest that during pregnancy, the blood brain barrier becomes more permeable and allows fetal cells to enter the mother's brain. Male fetal cells put male DNA into female brains, and female fetal cells would presumably enter the mother's brain as well---this particular analysis of the samples, however, was unable to reveal their presence. But the researchers only had limited information about their subjects' history of pregnancy. Only 9 of all the subjects were known to have sons, and at least 2 had no male children. The researchers suggest that male DNA in the brain may also have come from a miscarried or aborted male fetus. Or the male cells may not have entered the body during pregnancy after all. Some women may have acquired the foreign genetic material from a twin or older sibling who left DNA behind in the womb. Even a blood transfusion could have transferred male cells to the blood, and then to the brain. While this study only looked at about 60 brains, which is a fairly small sample size, the definite presence of male DNA shows that fetal cells can sneak past the mother's blood brain barrier. But to clarify that these are indeed fetal cells, rather than coming from another source, the researchers may want to autopsy a few more samples---samples with known pregnancy histories. Then we can see if the fetal cells have any affect on the risk of Alzheimer's disease.