How do you tell if your cow is feeling emotional? Just feel her nose! 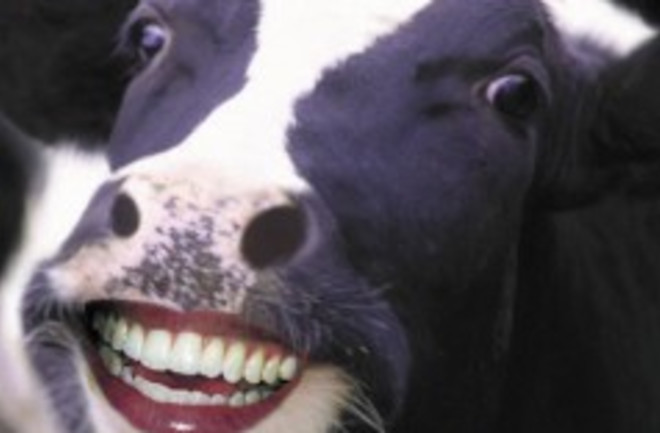 Photo: flickr/purpleslogA critical part of improving the treatment of animals involves minimizing their distress as much as possible. But while it can be obvious when an animal is in pain, knowing when an animal is happy can be more difficult. In this study, the authors observe that the temperature of a cow's nose goes down when it is experiencing positive emotions (in this case, enjoying being petted -- yes, apparently even cows like teh pets!). However, this finding is complicated by the fact that nasal temperatures also go down when animals are experiencing negative emotions. Not to have a cow about it, but it looks like figuring out how to differentiate between different emotions will have to wait for future research; until then, let's go pet some cows!

"Understanding how animals express positive emotions is an important area of focus for animal welfare science, yet it is widely neglected. Emotions can be either positive or negative in valence, depending on the rewarding or punishing nature of the stimulus, and they can vary in the degree of arousal or excitement. Previous literature has shown a strong connection between peripheral temperatures and high arousal, negative experiences. Stress, fear and frustration have all been found to cause a drop in peripheral temperature. Little is known however, about whether the experience of positive emotions affects peripheral temperatures. In this study we sought to identify whether the nasal temperature of cows was affected by emotions, and if nasal temperature could be reliably used as a measure of emotional state in cows. We induced a positive, low arousal emotional state by stroking cows in preferred regions, in a similar manner to allogrooming. We performed 350 full focal observations, each comprising three conditions; pre-stroking, stroking, and post-stroking. During each 15 minute focal observation we remotely took the focal cow's nasal temperature six times, twice during each condition. We analysed the data using the one-way ANOVA repeated measures test and found a significant difference overall (F (2, 1.935) = 9.372, p < 0.01). Post-hoc pairwise comparisons indicated that the total mean nasal temperature decreased significantly during the stroking condition (25.91 °C, SD = 1.21), compared with both the pre-stroking (26.27 °C, SD = 1.01, p < 0.01) and post-stroking conditions (26.44 °C, SD = 1.12, p < 0.01). There was no significant difference between the pre-stroking and post-stroking conditions (p = 0.14). We suggest that the cows were in a low state of arousal during the entire focal observation, as no other changes to the cows' environment had been made, and the cows were habituated to both the procedure and the researchers. Furthermore, the stroking stimulus is known to induce a state of relaxation and lower the heart rate of cows. This leads us to conclude that the drop in nasal temperature was indicative of the change in valence, rather than a change in arousal. These findings show that positive emotional state may have the same effect on the peripheral temperatures of mammals as a negative state does. This raises questions regarding the triggers for emotional fever, which is often considered to be associated only with negative states and high arousal. Our results indicate that nasal temperature in cows may prove to be a useful measure of a change in emotional state, but further research is required to validate these findings and to explore the effect of arousal on peripheral temperatures." Related content: NCBI ROFL: Think all cows look alike? Then clearly you're not a cow.NCBI ROFL: That cow needs a cold shower.NCBI ROFL: The locomotion of dairy cows on concrete floors that are dry, wet, or covered with a slurry of excreta.