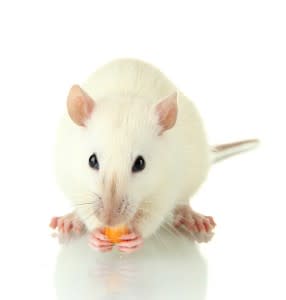 Researchers have discovered a hormone that triggers the production of insulin-producing cells in mice, a development that could lead to better diabetes treatments in the future. Diabetics are short on insulin---in the case of type 1 diabetes, because their immune system attacks their beta cells (the body's insulin factories); in type 2 diabetes, because their body stops responding to insulin's signals. The latter condition is called insulin resistance. All told, diabetes affects an estimated 366 million people in the world today. Daily insulin shots are a direct, if short-term, way to treat the disease, but researchers at Harvard think they may be onto an even more promising solution: boosting beta cells.

Beta cells reproduce via duplication. When we're babies, these cells are cranking out copies like crazy. But by the time adulthood rolls around, this production process has slowed down almost to a halt, so that less than one half of one percent of cells are dividing daily.

The researchers began with the knowledge, from previous work, that insulin resistance can spur beta cell replication. Essentially, the body creates more beta cells to try to solve the problem of insulin resistance. Then the researchers found a way to replicate insulin resistance in mice by giving them a drug. Under the effects of the drug, the beta cells duly replicated, and the researchers then looked at which genes in the mouse were responsible. One gene in particular, which researchers called betatrophin, seemed to be the key player. The researchers confirmed this by injecting healthy mice with betatrophin and observing its effects. Mice given betatrophin had three times as many beta cells, in terms of area, as did control mice, and twice as much insulin being created by the pancreas. And this insulin was definitely serving its purpose---injected mice had a lower fasting blood glucose level, and greater glucose tolerance, than the untreated cohort. These measures indicate that betatrophin could treat the underlying causes of diabetes. A number of genes and hormones have been shown to impact beta cell production along with other things, but betatrophin appears to be the first to produce only beta cells and impact their numbers significantly, according to the results

published in Cell this week. The scientists still don't know how betatrophin works, and the treatment is by no means ready for human use. But if future studies on diabetic people prove as effective as the ones on healthy mice, diabetics may eventually be able to have their cake and eat it too. Image courtesy of Africa studio/Shutterstock