Honeybees do the "Mexican wave"! 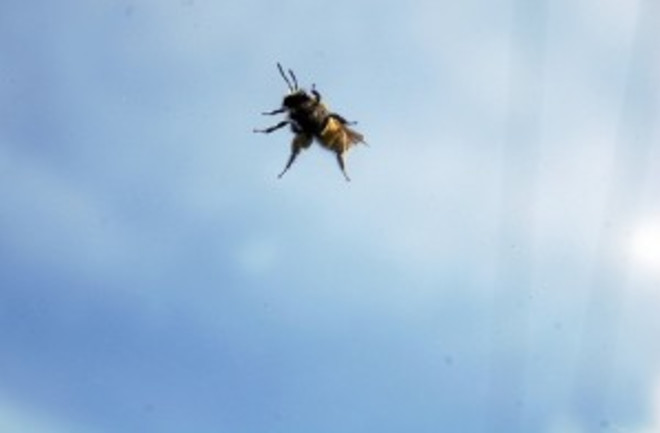 Here's another thing to add to the list of awesome things bees do: the wave! Just like sports fans in a stadium, when a predator appears, the bees do the Mexican wave...with their butts! Turns out, this repels hornets, and may also alert the rest of the hive to the presence of the enemy. Be sure to watch the awesome video after the jump!

Social waves in giant honeybees repel hornets. "Giant honeybees (Apis dorsata) nest in the open and have evolved a plethora of defence behaviors. Against predatory wasps, including hornets, they display highly coordinated Mexican wave-like cascades termed 'shimmering'. Shimmering starts at distinct spots on the nest surface and then spreads across the nest within a split second whereby hundreds of individual bees flip their abdomens upwards. However, so far it is not known whether prey and predator interact and if shimmering has anti-predatory significance. This article reports on the complex spatial and temporal patterns of interaction between Giant honeybee and hornet exemplified in 450 filmed episodes of two A. dorsata colonies and hornets (Vespa sp.). Detailed frame-by-frame analysis showed that shimmering elicits an avoidance response from the hornets showing a strong temporal correlation with the time course of shimmering. In turn, the strength and the rate of the bees' shimmering are modulated by the hornets' flight speed and proximity. The findings suggest that shimmering creates a 'shelter zone' of around 50 cm that prevents predatory wasps from foraging bees directly from the nest surface. Thus shimmering appears to be a key defence strategy that supports the Giant honeybees' open-nesting life-style." Bonus video from the materials and methods: http://www.youtube.com/watch?v=oM6GkfqoLjY