HIV/AIDS Patients in Papua May Be Tracked with Microchips 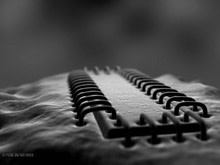 Indonesia's Papua province may be the first region in the world to force some HIV/AIDS patients to be implanted with microchip trackers. A controversial bill requiring the extreme measures already has full backing from the provincial parliament and will become law with a majority vote from the provincial legislative body. The microchips are meant to monitor "aggressive" sexual behavior in an effort to control the spread of the disease. Lawmaker John Manangsang said,

"It's a simple technology. A signal from the microchip will track their movements and this will be received by monitoring authorities" [Reuters].

The bill does not specify who would qualify as "sexually aggressive" patients, but if the bill is passed, a committee will be formed to decide who will be implanted; the executive director of the committee will be a physician with a knowledge of epidemiology. Supporters say

authorities would be in a better position to identify, track and ultimately punish those who deliberately infect others with up to six months in jail or a $5,000 fine [AP]. Meanwhile, health care workers and AIDS activists called the proposal "abhorrent" and a clear violation of human rights.

"No one should be subject to unlawful or unnecessary interference of privacy," [said Nancy Fee, the UNAIDS country coordinator]

, adding that while other countries have been known to be oppressive in trying to tackle AIDS, such policies don't work. They make people afraid and push the problem further underground, she said [AP].

Indonesia has one of Asia's fastest growing rates of HIV infection and Papua, the country's poorest province, has nearly 20 times the national average.

Health experts say the disease has been spreading rapidly from prostitutes to housewives in the past years [Reuters]. They say the best way to counter the epidemic is to increase awareness of the disease and encourage condom use.

Manangsang said the bill has to strike a delicate balance:

Related Content: Reality Base: Should It Be a Crime to Spread HIV? 80beats: South African Health Minister Breaks With Past, Says HIV Causes AIDS 80beats: Nobel Prize for Medicine Awarded to Virus Hunters

HealthDon't Inject Malaria Into Your Brain