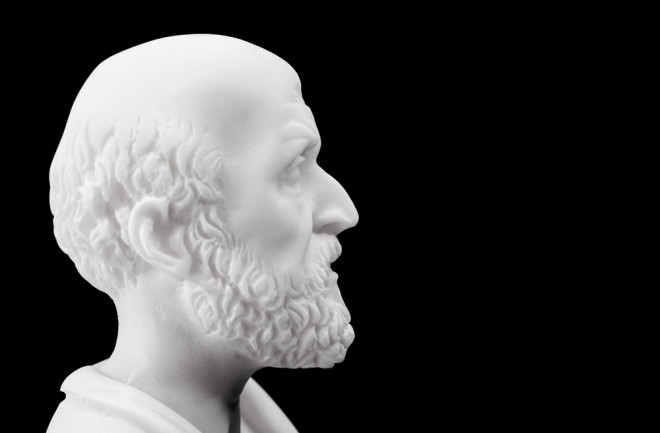 Hippocrates, the “the father of Western medicine" had a rather strange remedy for baldness—it didn't work. (Credit: blackboard1965/Shutterstock) For most people, baldness wouldn’t make it into the Top Ten Worst Things Ever; that list is more likely to be dominated by Ebola, cancer, dementia, and Kevin Federline’s Playing with Fire album. Nonetheless, it is a condition that countless men find distressing as they endure taunts like “Mr. Clean,” “cue ball,” or “chrome dome.” Surprisingly, attempts at curing baldness do not originate in our modern, superficial society. Actually, when it comes to palliating the naturally depilated pate, strange “cures” date back thousands of years. The Ebers Papyrus, which dates to around 1550 BC, includes various treatments for keeping big bad baldness at bay: a concoction of fats from a hippopotamus, a crocodile, a tomcat, a snake, and an ibex; applying porcupine hair boiled in water to the scalp for four days; and consumption of the leg of a female greyhound, sautéed in oil, with a side of donkey hoof. We know what you’re thinking: Who has that kind of time? Options weren’t much better a thousand years later when Hippocrates himself, “the father of Western medicine,” started having a less hirsute head. His answer: a mixture of opium, horseradish, pigeon droppings, beetroot, and spices applied to the head. We are not sure if that helped with baldness, but wouldn’t be surprised if some of his followers tried to smoke each other’s heads. Perhaps that’s where “pothead” originated from? Fast- forward another thirteen hundred years or so and meet Al-Kindi, a philosopher/doctor from the Baghdad area. He recommended pulverizing a goat’s cloven hoofs with vinegar and applying it to the head.

A 1937 Crosley Xervac hair stimulation device. (Credit: Mike Martini, Media Heritage, Inc.) Another eleven hundred years or so later, the recommendations in the United States included rubbing kerosene on the head, washing hair with “strong sage tea,” applying a mixture of cantharides, capsicum, quinine, and alcohol to the head, and using salt and white oak bark on the head. And now we must boldly go where many self- respecting balding men dare not, other than Victoria’s Secret: the territory of the combover and toupee. Reportedly Julius Caesar tried the combover, French king Louis XIII popularized the toupee, and George Costanza of Seinfeld fame tried both. But those who just can’t seem to embrace their inner Michael Jordan or Captain Picard have put far stranger things on their heads. Case in point: the Thermocap, made by the Allied Merke Institute in the 1920s. The idea was to put this helmet-like gadget on your head for fifteen minutes per day and thereby stimulate new hair growth owing to the combination of heat and blue light from the Thermocap. There was also the Xervac, produced in 1936 by the Crosley Corporation, a company that is still around today. This vacuum-like device was supposed to cause hair growth by using suction—just the first of many iterations of the Flowbee. Some of our follicularly challenged readers may be left wondering if there is any modern, scientific solution for baldness. Well, we imagine not many will choose this option, but, according to a study conducted at Duke University, “eunuchs will not develop baldness if castrated before age 25.” So there you have it, dear readers: If you want to have hair, just cut off your junk. Seriously, don’t do that.

Excerpted from "1 out of 10 Doctors Recommends", by H. Eric Bender, MD, Murdoc Khaleghi, MD, and Bobby Singh, MD. Copyright © 2016 by the St. Martin's Press. Used by permission. All rights reserved.