Words matter, and they can confuse. Here's Wikipedia's preamble for heritability:

Height and I.Q. are both heritable traits. Tendencies run in families. But the heritability is higher for both traits in developed societies or among those of middle class or higher. Why? Consider height. There are diminishing returns on nutritional input. Beyond a certain point eating more just makes you wider, not taller. In less developed societies where nutritional stress is more common there is a stronger environmentally induced socioeconomic correlation between height and status. European aristocrats who arrived in the United States in the 19th century were often shocked to meet American citizens of low or middling status who looked them eye-to-eye. Because of the surplus of land relative to labor in North America there was less nutritional stress than in Europe. But the point of this post is to reiterate a rule-of-thumb which is useful to keep in mind: traits which are strongly correlated with fitness tend to be less heritable, in that less of the variance of the trait value within the population is correlated with genetic variance. Why? Because natural selection will eliminate that variation over time. After all it operates upon fitness differentials within populations across heritable traits. It tends toward equilibrium. Here's a figure from the paper I pointed to earlier: 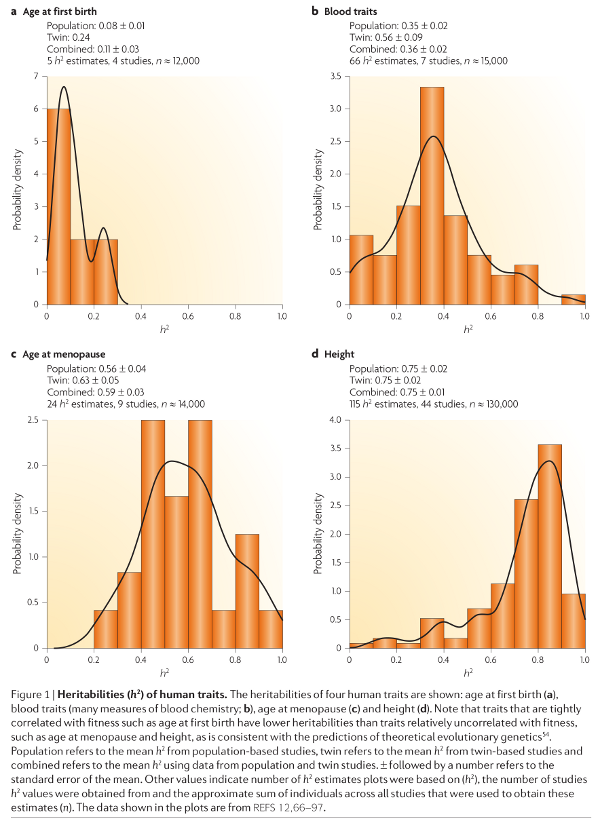 Age at first birth has a clear fitness implication. Fitness after all manifests through reproduction. Height on the other hand is a more confused issue. There may be antagonistic selection across the sexes, and, there is clearly a point where individuals who are too tall begin to suffer physiological problems. More later....