Hanuman is a pivotal and memorable character in the Hindu epic poem, the Ramayana. Known for his faithful devotion to Rama, the monkey-king is famous for rescuing Lord Rama’s bride Sita after she is kidnapped by the demon king Ravana, all the while defeating his demon army as commander of his monkey army. Hanuman is revered throughout south and southeast Asia not only for his devotion to Rama, but also for his steadfast spirit, his indefatigable strength, and his noble humility. He is also something of a rogue - the Coyote, the Loki, the trickster of Hindu mythology, the mischievous troublemaking deity with a heart of gold and a glint in his eye. 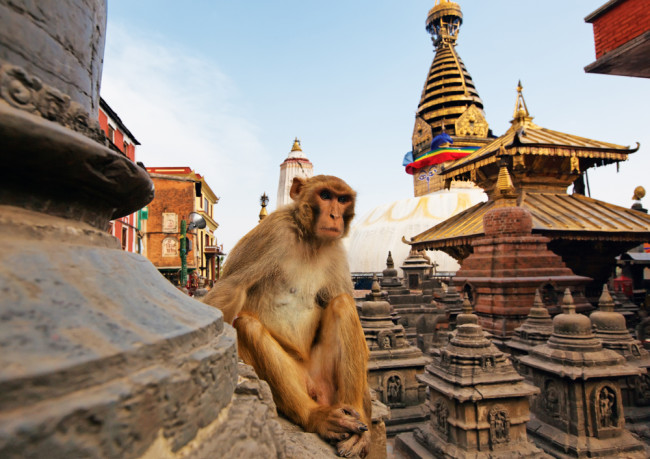 A macaque resting at the Swayambhunath Stupa, a monkey temple and one of the oldest holiest sites in Kathmandu, Nepal. It is also an important pilgrimage site. Image: Shutterstock. As incarnations of Hanuman, macaques, the most widespread genus of primates in the world, are tolerated and respected by Hindus. These monkeys are an integral part of the landscape of south Asia and receive protection and food from surrounding communities. Macaque monkeys have thrived in south and southeast Asia due to the benevolence of humans and the primates’ integration in religious mythology and local culture. Both ends of the primate order, whether of genus Macaca or genus Homo, have been living closely together in this region of the world for over 25,000 years (1). The biological concept of sympatry, referring to the geographic and social situation between two species or populations in coexistence, describes perfectly the relationship between macaques and humans in Southeast Asia.

Nowhere is this alliance more visible than in the monkey temples that are found throughout India, Nepal, Malaysia, and Indonesia. These temples are not only devoted entirely to the worship of Hanuman but also to the "monkey forests," areas of dense monkey settlement surrounding temples that serve as refuges, areas protected by the religious beliefs of locals. These de facto sanctuaries have become tourist destinations where close interaction with our distant cousins is actively sought (2).

The interspecies contact between us humans and the macaques is intimate, and bites and scratches are highly common - yes, yes, they are indeed biting the hand that feeds. Within local populations, worshippers, temple workers, nuns and monks, and market workers, the contact may be frequent and habitual. As Lisa Jones-Engel and her team of researchers quickly discovered while studying temple monkeys in Kathmandu, Nepal,

At these places of worship and the habitats that surround them, there’s bad behavior from both ends of the simian spectrum. As tourists gaze at the serene faces and posing dancers engraved on stone temples, the primates direct their gaze at visitors’ packaged snacks, drinks and precious, glinting cameras. Tourists court trouble by feeding the monkeys by hand. There are frequent reports of teasing in the form of yanking tails and taunting with food. The monkeys, emboldened by free handouts, go on to raid trash receptacles and the gardens and market stalls of villagers, “receiv[ing] significant components of their nutrimental requirements from humans or human activity” (3). As a direct consequence, the macaques often begin to harass and threaten the local (human) community for both food and territory.

“Macaques climb on the heads and shoulders of visitors, which may bring macaque body fluids into contact with visitors’ eyes and nasal and oral mucosa, potential portals of entry for infectious agents. Visitors may also be bitten or scratched by macaques during aggressive encounters, resulting in transcutaneous exposure to infectious agents present in macaque body fluids”(4).

These types of “mucosal splashes” - if those words don't send a chill down your spine then you are made of a tougher mettle than I - are a tailor-made recipe for pathogen swapping.

A poignant example: the Padangtegal Wanara Wana temple complex in Bali, Indonesia spans two towns with three temples, scattered shrines and statues in 17 acres of forest. It’s commonly marketed as “the sacred monkey forest” and is a major tourist destination in Bali with tens of thousands of visitors, both domestic and international, getting a glimpse of the star attraction, the crab-eating, bewhiskered Macaca fascicularis. 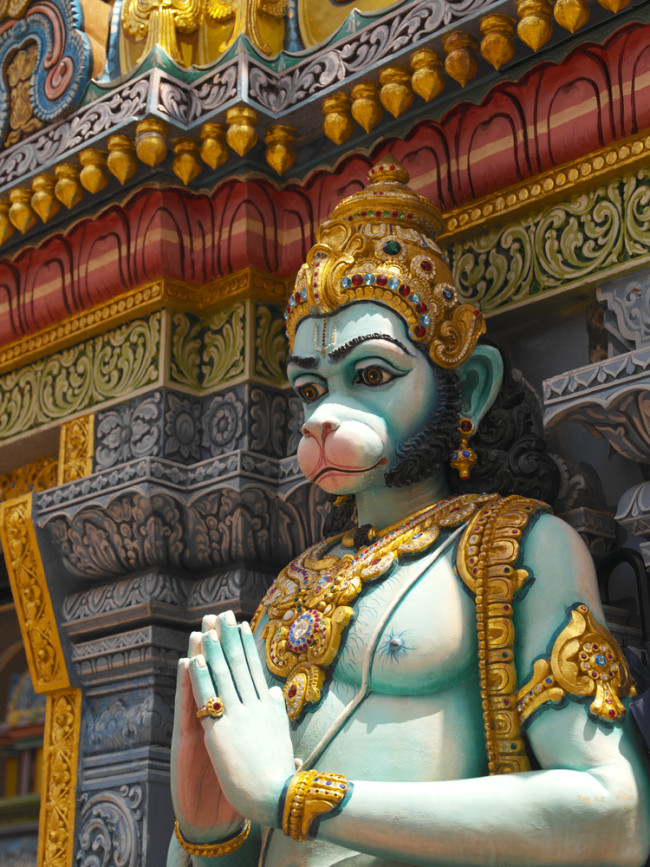 Now the kicker. In a 2002 study, a survey of employees at the Sangeh Monkey Forest in Central Bali found that 50% of those interviewed regarding their interactions with the macaques reported a scratch or bite injury (6). Testing of the blood serum from trapped macaques found over 80% of the monkeys had antibodies to herpes virus B, a virus that causes a benign infection in macaques but a severe meningoencephalitis in humans. Both findings suggest that the risk of transmission of primate pathogens to humans is not only very real but a matter of concern for those practicing public health in susceptible local populations and for those caring, before and after, for tourists venturing to these destinations.

At another Balinese temple in the Sangeh Monkey Forest, a 2005 study reported the first known transmission of simian foamy virus (SFV) from a macaque to a human, a long-time daily worshiper at the temple (7). He reported being scratched on multiple occasions during his visits, including at least one bite. This was a particularly intriguing moment for those studying primate retroviruses as SFV is “not known to occur naturally in humans.”

Many of the big name pathogens so familiar to us - tuberculosis, HIV, and SARS, to name a few - originated in animal species and evolved to infect humans. As such, animals are an important source of emerging infectious diseases that can threaten and have repeatedly threatened human populations. The international travel and tourism that increase the likelihood of intimate animal-human interactions also amplify the risks of novel cross-species pathogen transmission. 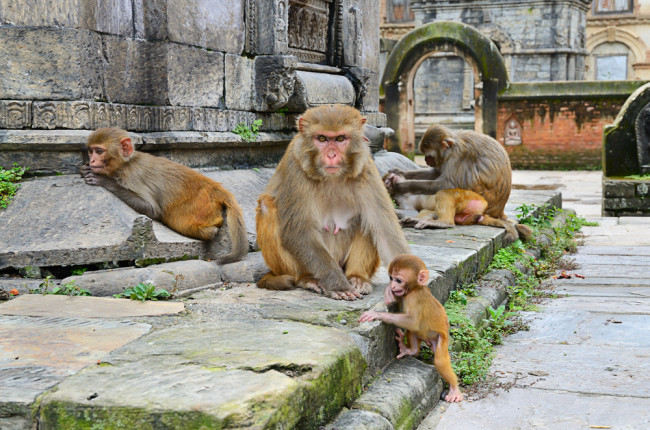 At monkey temples, macaques can infect humans with simian T cell lymphotropic viruses (STLV), simian retrovirus (SRV), simian foamy virus (SFV), and herpes B virus (5). And, of course, there's always the viruses that we don't know about, the unknown unknowns. For the millions of tourists to monkey temples throughout Southeast Asia, monkey temples are one of the most important “interfaces” that exist between humans and primates. For public health officials, monkey temples are actually “a potential point source for the global dispersal of infectious agents, as world travelers can return to their homes carrying novel infectious agents transmitted from macaques ... creat[ing] the potential for rapid global dispersal of primate-borne infectious agents to human populations around the world” (4).

Monkey temples are sanctified zones of interspecies interaction and worship. They also serve as a stage, an eternal petri dish, so to speak, where viruses are swapped, can genetically evolve and even develop into new primate pathogens. It's vital to watch these commensal zones between humans and animals - especially among animals that are so closely related to humans, genetically and physiologically. Injuries associated with animals are not rare - they account for 10% of all medical consultations sought by returning tourists with dogs and monkeys ranking first and second among all animal-associated incidents (8). The unwatched, ongoing interactive space between temple monkeys and humans is a slow-moving public health train wreck in the waiting. Without monitoring both the primate and the human population and going-ons of this fascinating human-macaque sympatry, both locals and foreign visitors, we cannot know what sort of free-for-all virological party happening between us and our simian cousins. Primate viruses are getting a free pass to evolve into something much nastier with a preference for humans. As echoed in a 2006 article in The Lancet, these temples could be “opening the door for other non-human primate viruses to follow the same path in regions where human beings and non-human primates coexist” (9). And that’s no monkey business. Resources There is a heady mixture at play here - economic incentives from tourism, the vital religious acceptance and worship of macaques, and food sustenance and protection for the monkeys. These anthropogenic, economic and ecological factors can’t be ignored. In many temples, the sole source of nutrition for these monkeys is from tourists and sympathetic locals. Similarly, the monkeys and the temples are a vital economic resource for the surrounding communities. Check out just a few of the monkey temples cataloged at Wikipedia

to get an idea of how important they are to south and southeast Asia. "Sita Sings the Blues" is a wonderful animated film on the Ramayna using Indian shadow puppets interspersed with songs by jazz singer Annette Hanshaw. You can watch it here