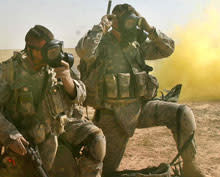 Thousands of Gulf War veterans who complained of memory and concentration problems, rashes, headaches, and muscle pain following their return from Kuwait and Iraq were suffering from a real illness and weren't just feeling the aftereffects of combat stress, according to a new congressionally mandated report.

The report broke with most earlier studies by concluding that two chemical exposures were direct causes of the disorder: the drug pyridostigmine bromide, given to troops to protect against nerve gas, and pesticides that were used — and often overused — to protect against sand flies and other pests [Los Angeles Times].

One-quarter of the 700,000 U.S. troops who took part in Operation Desert Storm have reported symptoms of Gulf War Syndrome, according to the report, which

fails to identify any cure for the malady. It also notes that few veterans afflicted with Gulf War illness have recovered over time [CNN].

The report calls for at least $60 million in new federally funded research on the syndrome and potential treatments. The new assessment contradicts the findings of an earlier study conducted by

the prestigious Institute of Medicine, an arm of the National Academy of Sciences, blaming stress and other unknown causes for the soldiers' symptoms. "Everyone quotes the Institute of Medicine documents as meaning nothing's going on here," said Roberta F. White, ... the congressional panel's scientific director. "Some people feel that the IOM reports have been permission to ignore these guys" [Los Angeles Times].

Veterans groups say that they hope the new findings will make it easier for veterans to get medical treatment for the ailment. The report did put one theory of the cause of Gulf War Syndrome to rest:

With regards to exposure to depleted uranium contained in munitions, the report states that " the specific types of human health effects that have been described in relation to DU and uranium exposure have little apparent relationship to the pattern of chronic symptoms associated with Gulf War illness." Nearly 320 tons of depleted uranium were used during the war, and much of it remains in the local environment [USA Today].

Related Content: DISCOVER: The Gulf War Within investigated vets' symptoms back in 1997 DISCOVER: Chemicals at War explains that common chemicals could be the culprit DISCOVER: A Syndrome for Every War examines the hypothesis that stress was the root cause 80beats: VA Tested Drugs That Could Produce Psychosis on War VeteransImage: U.S. Army