The FDA and other researchers are investigating the link between grain-free dog food and a heart condition called dilated cardiomyopathy. 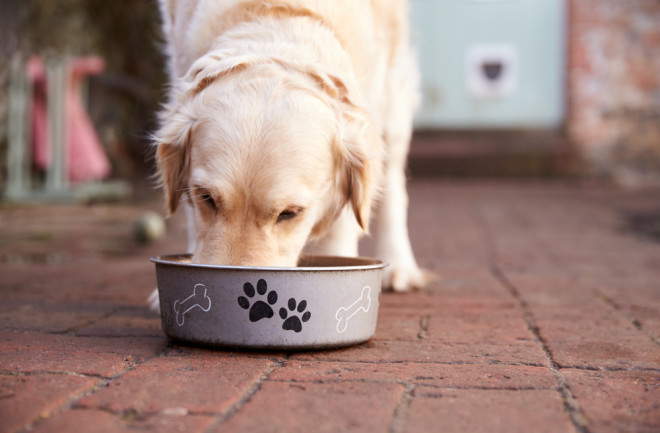 For the past two years, the FDA has been investigating a strange development in dog health. The agency started hearing reports that more pups than usual were developing a condition called dilated cardiomyopathy, which causes the heart to weaken and grow larger.

Typically, veterinarians see this issue in large dogs. Some breeds, such as Doberman pinschers, Great Danes and others, are genetically predisposed to the condition, which slowly saps the heart of its ability to efficiently pump blood. This can lead to fainting, weakness or death. But recently, dogs that aren’t considered at risk of the heart disease, like golden retrievers, started showing up to veterinarian offices with enlarged hearts. Veterinarian providers began talking amongst themselves and observed that some of these dogs were eating “grain-free” food — kibble and soft canned food formulated without corn, wheat and soy. It begs the question: Could these heart troubles stem from a dog’s diet?

That's what prompted the FDA and other research groups to investigate the health effects of grain-free dog food. For the most part, researchers have a lot to learn about this supposed relationship, which is a familiar situation for the profession. “All of us that are in this from an academic standpoint are the first to admit that nutrition of dogs and cats is woefully behind that of other animal species and humans,” says Greg Aldrich, a pet nutritionist at Kansas State University. The more investigators learn, the closer they come to gaining broader understandings about what keeps our pets healthy.

A stroll through the ever-expanding pet care aisle could leave any owner confused about what food to buy. A few decades ago, this might not have been the case. That’s when grain-free varieties first emerged, and the products took up little shelf space. This type of dog food appeared, in part, because some breeders and owners concluded that commodity foods like soy and other grains must somehow be lower quality, Aldrich says. The science doesn’t back up that idea. But that didn't stop the product from taking off. “It emerged from nothing to a prominent part of the marketplace,” Aldrich says.

To replace starches in grain-free kibble, companies introduced substitutions like sweet potatoes, lentils and legumes. But these "new" ingredients could leave dogs with low levels of an essential protein building block called taurine. Legumes might not be an adequate source of two precursor nutrients that dogs' bodies rely on to make taurine. To add to that, it's also possible that these alternative starches can ferment in dogs' intestines and may foster taurine-degrading microbes — creating a one-two punch of nutrient deprivation. Several grain-free formulas also throw in more unusual or exotic protein sources, like lamb, duck and kangaroo — all of which might provide less taurine, or make the precursor nutrients less effective.

These possibilities are just that — possibilities, Aldrich says. Researchers have yet to conclusively prove whether or not these ingredients cause enough taurine deficiency to create heart problems in dogs. In one study, dogs on grain-free diets had some heart measurements that were larger than those of dogs on traditional kibble, but they didn’t show any taurine deficiency. When seven of the dogs that had heart abnormalities switched to traditional diets, the researchers saw their condition improve. Other research looking at beagles found that when the pups ate grain-free diets that supplemented with taurine, their taurine levels were comparable to those of dogs on normal food.

When it comes to golden retrievers, diets that cut out grains but include legumes might be especially troublesome. A 2020 study linked this type of diet with taurine deficiency and heart abnormalities in goldens that were consistent with dilated cardiomyopathy. The researchers also found that goldens with heart problems were more likely to be fed dog food produced by smaller companies.

In fact, of all the dogs with this particular heart issue reported to the FDA recently, golden retrievers are the most represented breed. The agency thinks this is because of a reporting bias, as social media pages dedicated to the breed might have encouraged owners to bring their pets to the vet, but it’s also possible that some breeds are more sensitive to taurine deficiencies.

In fact, it’s likely that a range of other life factors — beyond diet — influence whether or not dogs develop this heart problem. Researchers don’t know if obesity, diabetes or other health conditions make a dog more likely to develop dilated cardiomyopathy, Aldrich says. The influence of household chemicals or pesticides is similarly unclear.

What's In Your Kibble?

If dietary factors are to blame for dilated cardiomyopathy, it's also possible that the problem might be related to overall recipe formulations used by some brands rather than single ingredients. “What seems to be consistent is that it does appear to be more likely to occur in dogs eating boutique, grain-free, or exotic ingredient diets,” writes Lisa Freeman, a veterinary nutritionist at Tufts University, in a Cummings Veterinary Medical Center blog post. A quality, nutritious dog food needs a range of considerations, including “rigorous quality control and extensive testing,” she writes. “Not every manufacturer can do this.”

When it comes to selecting dog food, the consumer is often making an educated guess at best. Though there are basic requirements each manufacturer is supposed to meet, “there’s no Good Housekeeping Seal of Approval,” Aldrich says. If you’re unsure, aiming for a middle of the road dog food variety is a safe bet.

Like with humans, the standard dietary recommendations don’t work for every dog, Aldrich points out. It might be the case that nutrition recommendations should be tailored to each breed, as there’s so much variance — from tiny Yorkies to mastiffs the size of adult men. “We want to be there, but we're just not,” he says.

Editor's Note: This story has been updated to correct Lisa Freeman's field of work.