The population explosion that followed the Neolithic revolution was initially explained by improved health experiences for agriculturalists. However, empirical studies of societies shifting subsistence from foraging to primary food production have found evidence for deteriorating health from an increase in infectious and dental disease and a rise in nutritional deficiencies. In Paleopathology at the Origins of Agriculture (Cohen and Armelagos, 1984), this trend towards declining health was observed for 19 of 21 societies undergoing the agricultural transformation. The counterintuitive increase in nutritional diseases resulted from seasonal hunger, reliance on single crops deficient in essential nutrients, crop blights, social inequalities, and trade. In this study, we examined the evidence of stature reduction in studies since 1984 to evaluate if the trend towards decreased health after agricultural transitions remains. The trend towards a decrease in adult height and a general reduction of overall health during times of subsistence change remains valid, with the majority of studies finding stature to decline as the reliance on agriculture increased. The impact of agriculture, accompanied by increasing population density and a rise in infectious disease, was observed to decrease stature in populations from across the entire globe and regardless of the temporal period during which agriculture was adopted, including Europe, Africa, the Middle East, Asia, South America, and North America.

The abstract makes the conclusion more cut & dried than it is. It's the result of aggregating their literature review and arriving at a net conclusion. Yes, on the balance agriculture did result in the deterioration of health. The old truism that farmers are a small and ill lot in comparison to hunter-gatherers seem to be correct in the generality. But the literature review also makes it clear that when it comes to something like stature there are often periodic reversals of the trend toward decrease in size. There may be spottiness of the record, and sampling error, but I began to wonder if we might not be seeing evidence of evolution & innovation in action! Consider the checkered history of the potato in Ireland. In the 18th century the Irish shifted toward the potato faster than most other European peoples, and so entered into a phase of massive population expansion. On a per unit basis the potato was nutritional gold. Unfortunately we all know that the blight of the 19th century triggered a series of social and demographic catastrophes. But, the insight here is that we may have to think of the "transition to agriculture" as a more complex affair. My conceptualization is most easily illustrated by a chart: 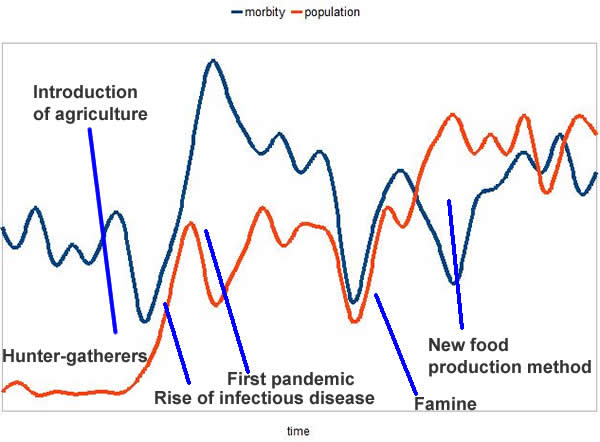 First you see the low population-low morbidity stable-state of the hunter-gatherer society. Per unit productivity is low, keeping a check on the maximum carrying capacity. But because populations are dispersed many of the infectious diseases which we take for granted are simply not issues for hunter-gatherer bands. Next you see the transition to agriculture. This increases per unit productivity by a order of magnitude, resulting in a situation of "land surplus." A huge population explosion follows, and now the stage is set for the rise of infectious diseases. As the population reaches carrying capacity individuals are under nutritional stress. Additionally, the agriculturalists will also no longer have access to game & herbs to supplement their calorie-rich but micronutrient and protein poor diets. They've given the land over to raising enough food to maintain their population. Now diseases of mass agriculture begin to spread, and the new farmers have no resistance. Already subject to greater morbidity because of the nature of their diet, they become victims of a pandemic. In classic Malthusian fashion morbidity abates as population density declines. Additionally, the survivors will now have some immunity to the infectious agents. We are past "peak morbidity." Evolution also now begins to select individuals who are more well adapted to the rigors and stresses of agricultural life. The population reaches carrying capacity again, but though morbidity is still above the hunter-gatherer stage, it does not hit its previous high. This does not prevent populations from being beset by "exogenous shocks." A famine results in a sharp population reduction, but after the environment becomes favorable again the population bounces back. Also, the temporary land surplus benefits the survivors. Despite the power of "endogenous" parameters, there are always going to be periodic random environmental catastrophes or windfalls modulating the population size and average well being. Finally, a secondary "agricultural revolution" occurs. A new innovation, most likely a superior cultivar or food crop, arrives on the scene. Like the original transition to agriculture you see an immediate per unit increase in productivity. This means that there is a practical land surplus. Because the population is now "catching up" to its carrying capacity the morbidity drops again. What happened in Ireland in the 18th century, or in China after the "Columbian Exchange," may be modeled by this phenomenon. Finally the population is at a new higher carrying capacity. Even this is simplified. But I think it takes into account the reality that both biology and culture evolve. And it may explain some of the shifts outside of the standard Malthusian economic model, which assumes a relatively static technological environment.