Got Allergies? Scientists Engineer a Cow That Makes Hypoallergenic Milk 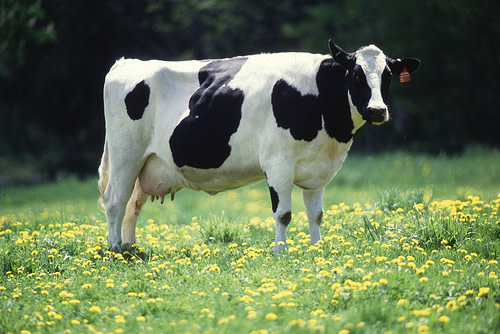 People with milk allergies often turn to products like rice and soy milks. But now, in a twist, there is a new source of hypoallergenic milk in the offing: genetically-modified cows

that gives milk devoid of a protein, called beta-lactoglobulin (BLG), that causes an immune response in people with milk allergies. To get the milk this way, they had to engage in some fancy genetic footwork: They inserted a specially designed gene into cow embryos that prevented the production of BLG. When a gene is transcribed into a protein, a transcript called mRNA carries the relevant information from the cell's nucleus, where the gene is, to the protein-making machinery. The gene the researchers put into the cow embryos was specifically built to glom onto the mRNA for the beta-lactoglobulin protein, thus preventing it from reaching its destination, and preventing any beta-lactoglobulin from being made. Out 57 cow embryos used, the team got one healthy female calf that did indeed produce BLG-free milk. This new milk is not meant for lactose-intolerant people: lactose intolerance happens when people cannot break down a milk sugar, lactose, and does not involve BLG. But sometime in the future, such hypoallergenic milk could be a boon for the 2 to 3 percent of babies in developed countries have allergies to proteins in milk. Though baby formulas in which whey has been specially treated to break down BLG exist, they are expensive to produce, not one-hundred-percent BLG-free

---and they don't always taste good, the researchers wrote. But how does this milk taste? Inquiring minds want to know, and the researchers, unfortunately, did not report any taste tests of their new BLG-free milk.