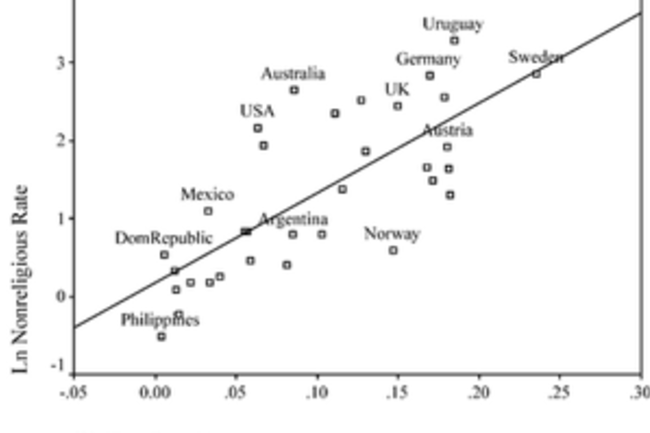 This was a question that Anthony Gill and Erik Lundsgaarde tackled by in 2004. They analysed the data from a range of countries, and found that the greater proportion of GDP that was spent on government welfare, the more non-religious people there were and the lower church attendance was. This held true even after statistically adjusting for other factors, like per-capita GDP, urbanization, government regulation of religion, and religious pluralism.

The standard explanation for this relation is that religion & government provide competing services, welfare. As government expands it presumably "crowds out" civil society welfare services, of which religious institutions are generally the most prominent. The author of the blog post above is generally skeptical of this model. I personally think it's plausible, but the "rational choice" framework which it emerges from has generally been found wanting in many circumstances (e.g., general failure to explain religious dynamics in Eastern Europe after the fall of Communism). So more exploration of the topic is needed. But I was wondering, how about checking to see if there's a relationship between religion & welfare in the United States? I found per capital welfare spending by state, percentage with "No Religion" from The American Religious Identification Survey, and queried how important religion was and what percentage were atheists from the Pew Religious Landscape Survey. I didn't adjust welfare spending for background variables (cost of living, age structure, etc.), but I thought it would be instructive as a "quick & dirty" exploratory exercise. Charts below. 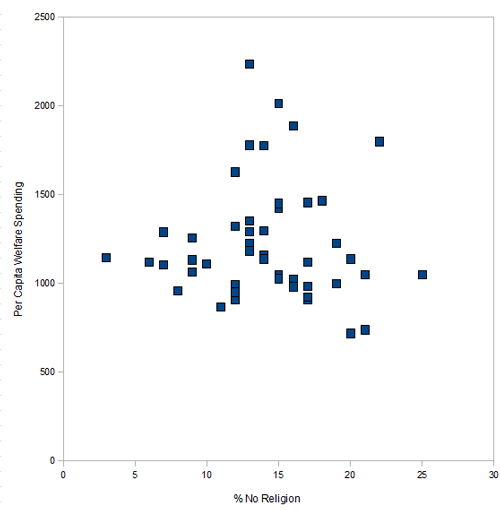 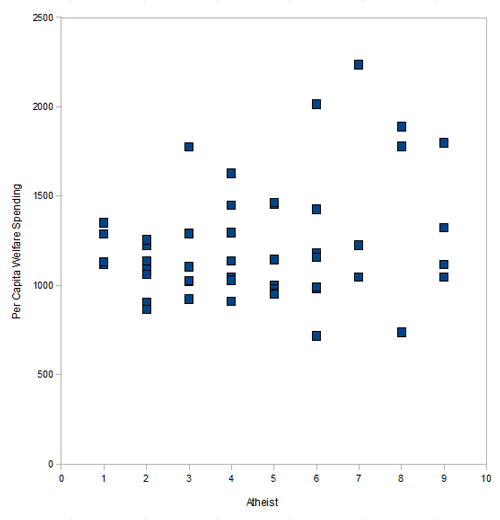 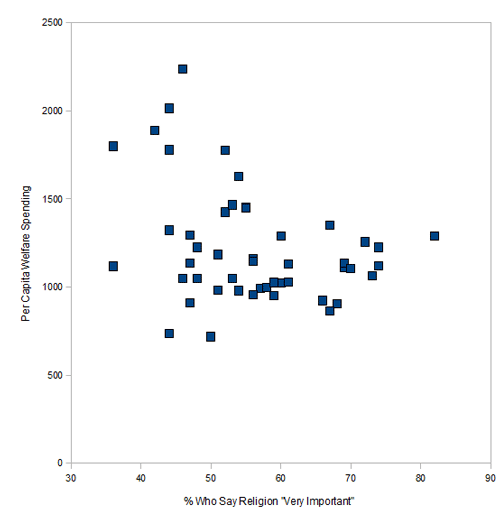 I didn't put any trendlines because there really weren't any trends. Perhaps cost of living has to be taken into account and such. But I think it is important to note that quite a few high welfare states are actually not very secular, especially in the Midwest and Northeast, while several very low welfare states in the West are very secular. New Hampshire and Vermont are basically the same religiously, but their welfare spending profiles differ, with liberal Vermont being among the top spenders and moderate New Hampshire being in the middle of the pack. If 1 = the lowest per capita spending on welfare, New Hampshire is 1.56 and Vermont is 2.51. Maine, which seems marginally a bit more religious than these two states actually spends more per capita on welfare than Vermont. Raw Data: