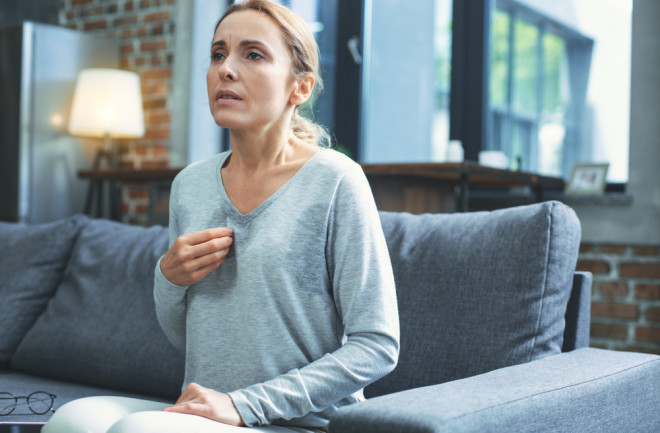 (Credit: YAKOBCHUK VIACHESLAV/Shutterstock) Hot flashes — sudden rushes of overwhelming warmth that heat up the body like a roaring furnace – plague millions of women, and some men. Now scientists find a single type of brain cell is responsible for setting off these heat bombs in mice. The discovery may lead to better treatments for keeping the body’s thermostat at a pleasant temperature. Currently, the go-to remedy for hot flashes is estrogen replacement therapy to compensate for a drop in estrogen levels after menopause. But as a hormone, estrogen has effects throughout the body and isn’t an option for many people including those with liver disease, who are at risk for strokes and women suffering breast cancer. To find better treatments, scientists needed a better grasp on what causes hot flashes.

Richard Palmiter, a neuroscientist at the University of Washington in Seattle, had a hunch. Five years ago, a neurologist at the University of Arizona in Tucson named Naomi Rance had laid out what was known about hot flashes at the time and proposed an idea. She suggested neurons tucked away in a pocket of the hypothalamus — a region of the brain that controls many basic life functions including hunger, thirst, fatigue, and body temperature — and that make a molecule called kisspeptin might be the link between estrogen levels and hot flashes. Kisspeptin wields serious influence as puberty and reproduction may depend on this protein. Mutations that disable kisspeptin lead to a condition called hypogonadotropic hypogonadism, which can stop, delay or even prevent sexual maturation in humans and rodents for example. Estrogen usually keeps kisspeptin-producing neurons in check, but thanks to a drop in sex hormones during menopause, these brain cells swell. As they grow larger, the neurons produce more kisspeptin and another molecule called neurokinin b known to affect body temperature. The evidence suggests kisspeptin neurons may spur hot flashes. The problem with studying hot flashes is that they are transient, lasting from seconds for up to an agonizing 10 minutes. Though warm temperatures, anxiety and spicy foods can bring them on, it’s hard to predict when they’ll happen. Palmiter was looking for a way to reliably trigger hot flashes for study and he wondered if stimulating kisspeptin neurons would do the trick.

So, using a technique known as optogenetics that allows scientists to stimulate neurons with fiber optic cables and flashes of light, the researchers selectively turned on the kisspeptin neurons in female mice. And right after doing so they saw that temperatures rose in the rodents. Using a thermal camera that color codes temperature, Palmiter and his team watched as the mice’s tails became warmer, their blood vessels expanding to bring body heat to the skin’s surface to get rid of the extra warmth. The mice also didn’t move around in their cages as much as control mice, a sign that they were too warm to behave as they typically might, the scientists reported July 10 in the journal Cell Reports. “It worked out remarkably,” says Palmiter. Though estrogen is a female sex hormone, the neurons are present in both sexes, so Palmiter and team activated the neurons in male mice, too. The boys flushed just as much as the female mice had, another sign that kisspeptin neurons are behind hot flashes. Then the team went one step further. Since it’s neurokinin b that regulates body temperature, not kisspeptin, the researchers gave female mice a drug that stops the molecule from performing its normal function. When they then activated the kisspeptin neurons, the mice stayed cool, a sign that it is likely neurokinin b specifically, and not something else related to kisspeptin neurons, causing hot flashes. Targeting these neurons or the molecule directly could be an alternative treatment for post-menopausal women suffering from hot flashes. Clinical trials are already underway. “This [research] should only be the tip of the iceberg, really,” says Rance.