Getting a fix on those baby blues

I have postedbefore on recent work which seems to establish that the OCA2 locus is responsible for the majority of the variation within populations where both blue and brown eyes are extant. Well, now there's a massive paper out by Tony Frudakis, Multilocus OCA2 genotypes specify human iris colors, that adds even more detail in terms of the markers (SNPs) which can predict eye color:

Human iris color is a quantitative, multifactorial phenotype that exhibits quasi-Mendelian inheritance....Herein, we describe an iris color score (C) for quantifying iris melanin content in-silico and undertake a more detailed survey of the OCA2 locus...Haplotype analysis with respect to these 33 SNPs revealed six haplotype blocks and 11 hap-tags within these blocks. To identify genetic features for best-predicting iris color, we selected sets of SNPs by parsing P values among possible combinations and identified four discontinuous and non-overlapping sets across the LD blocks...in a second, partially overlapping sample of 1,072, samples with matching diplotypes comprised of these p-Selected OCA2 SNPs exhibited a rate of C concordance of 96.3%...which was significantly greater than that obtained from randomly selected samples (62.6%, n = 246, P<0.0001). In contrast, the rate of C concordance using diplotypes comprised of the 11 identified hap-tags was only 83.7%, and that obtained using diplotypes comprised of all 33 SNPs organized as contiguous sets along the locus (defined by the LD block structure) was only 93.3%. These results confirm that OCA2 is the major human iris color gene and suggest that using an empirical database-driven system, genotypes from a modest number of SNPs within this gene can be used to accurately predict iris melanin content from DNA. 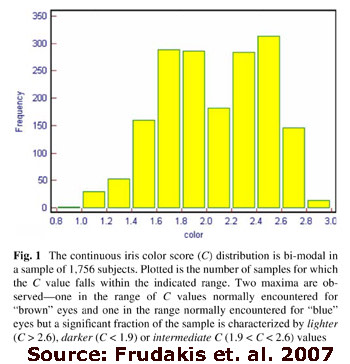 This figure is definitely my favorite. It illustrates how this group broke down eye color into a quantitative trait. They found that a) eye color is bimodal in the distribution, and b) their markers were better able to predict the quantitative range than a simple binary classification into "light" and "dark." Bimodality confirms the rough quasi-Mendelian character, there's a locus of large effect which is controlling most of the variation and the trait is segregating within the population into two gross phenotypes. The fact that the markers were more effective at predicting the quantitative index of color than a binary classifications suggests that removing information and boxing the phenotypes into artificial categories makes the model less effective. The way humans describe and perceive categories can make science harder than it needs to be. A major point that the authors emphasize is that OCA2 seems to be the most polymorphic of the major pigmentation related genes. That's interesting, because it suggests that it has less functional constraint than elsewhere or that selective sweeps haven't been that recent in most populations (OCA2 is subject to selection in East Asians and Europeans, not in Africans). One reason that one locus of major effect can produce such a range is probably because there are many alleles segregating within the population, and those alleles exhibit different phenotypic average effects (the other reason is that there are loci of small effect working at the margins). The authors point out that polymorphism seems more prevalent on dark iris color. This makes sense if you believe that the blue eye trait is relatively recent and due to selection on a few recent alleles; there simply hasn't been as much time for a distinctive range of SNPs to build up around the derived variants. If you read the paper you might wonder as to why the authors were so thorough and obsessed. The reason is simple: the lead author is employed as a forensic geneticist, and his company stands to make a lot of money if they can accurately predict the phenotype of criminals from their DNA samples. Some evolutionary biologists have pointed out that mapping genotype to phenotype is a major hurdle in turning the field into a predictive science, that confounding issues such as gene-environment interaction, gene-gene interaction, etc., may make it an impossible task. Not in the case of blue eyes and OCA2. Frudakis et. al. admit they don't have a good specific functional grasp of what's going on (most of their SNPs aren't even synonomous polymorphisms within transcribed regions), but they seem to have zeroed in on enough markers to be able to predict the characteristic of this trait, which is not much impacted by various interaction or environmental factors. Sometimes it is that simple!