Get this pound cake an MRI, stat! 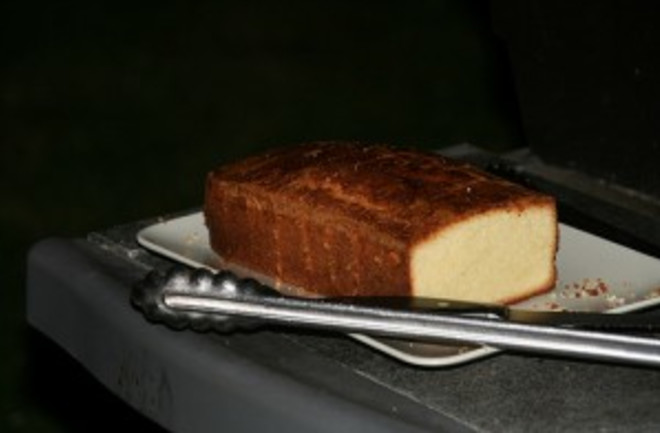 Photo: flickr/(Mariam)Pound cake is a dense vanilla cake made with lots of butter and eggs. NMR is used by chemists to determine the structure of molecules, and is also the phenomenon behind MRI, which is used to take pictures of dense brains, butter and eggs. OK, maybe not the butter. But why not combine the two? Here, a group of food chemists did NMR on pound cake "to study the mobility of biopolymers and water in a pound cake system." They hope their results can be used to better understand the characteristics of the best pound cakes, as well as how cake changes during storage. Read on for a sweet description of how the slightly crunchy pound cake crust takes on a different texture than the dense, moist, buttery, vanilla-flavored center. Are you drooling yet?Low resolution 1H NMR assignment of proton populations in pound cake and its polymeric ingredients. "Based on a model system approach, five different proton populations were distinguished in pound cake crumb using one dimensional low resolution (1)H NMR spectroscopy. In free induction decay (FID) measurements, proton populations were assigned to (i) non-exchanging CH protons of crystalline starch, proteins and crystalline fat and (ii) non-exchanging CH protons of amorphous starch and gluten, which are in little contact with water. In Carr-Purcell-Meiboom-Gill (CPMG) measurements, three proton populations were distinguished. The CPMG population with the lowest mobility and the FID population with the highest mobility represent the same proton population. The two CPMG proton populations with the highest mobility were assigned to exchanging protons (i.e., protons of water, starch, gluten, egg proteins and sugar) and protons of lipids (i.e., protons of egg yolk lipids and amorphous lipid fraction of margarine) respectively. Based on their spin-lattice relaxation times (T1), two dimensional (1)H NMR spectroscopy further resolved the two proton populations with the highest mobility into three and two proton populations, respectively." Bonus quote from the full text: "The cake structure results from starch and egg gel formation during baking. Because of the temperature gradient during baking, the structure sets progressively. The surfaces that are either in contact with the baking tin or with air receive more heat and set earlier to form the crust. This crust is set even without complete starch gelatinisation and has very low water content (Wilderjans et al., 2010). The CPMG spectrum of pound cake crust contains only two proton populations (Fig. 5c). Because of the much lower moisture content of cake crust (ca. 8%) than of crumb (ca. 26%) the mobility of its exchanging protons is much lower. This is reflected in the lower T2 of the exchanging protons in cake crust (0.6 ms) than in crumb (6.3 ms) (Fig. 5b and c). The peak area is also strongly reduced (Fig. 5b and c). Proton population A contains non-exchanging protons of starch, proteins and crystalline fat. Because of its lower moisture content and the presence of ungelatinised starch in the crust, the number of protons in this proton population is much higher than for the crumb samples. Cake crumb from zones between the crust and the center of the crumb, can be incompletely gelatinised (Wilderjans et al., 2010). Therefore, the spectra of the crumb from these zones are intermediate between those of crumb and crust (results not shown)."