Get Fit, Get Off: Women Can Orgasm During Exercise, Especially on the "Captain's Chair" 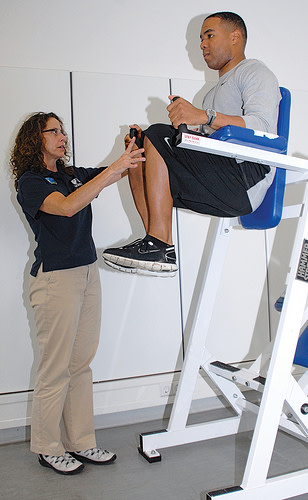 Sorry dude, no orgasms for you.

It's a study that launched a thousand jokes. A new survey

puts weight behind the seemingly too-good-to-be-true claim that women can orgasm during exercise. (Bonus: the paper is published in a very Discoblog-friendly special issue

of Sexual and Relationship Theory, all about the science of orgasms.) Researchers collected online survey responses from over 300 women who reported orgasms or feeling "sexual" pleasure at the gym, even though they were not thinking sexual thoughts. But not all exercise is created equal, and some kinds are more pleasurable than others. Ab exercises, pole climbing (figures!), biking, and weight lifting were the most common orgasm-inducing activities. A piece of equipment called the "captain's chair" made especially frequent appearances. (Just me or does it kinda sound like an S&M thing?) Anyways, the captain's chair is used for knee-raising ab exercises like in the image shown here. So what's going on, anatomically? The internal part of the clitoris

extends into the pelvis, and exercise increases bloodflow and flexes muscles in the area. Sorry, we can't tell you any more because the science of female orgasms is still poorly developed and even anatomy textbooks are getting it wrong

(pdf). The authors of this paper are careful not to call these exercise-induced orgasms "coregasms," a word coined by the Internet literature

, because there's no evidence core muscles are actually involved. Whatever the explanation, it seems like at least some women are having a pretty good time at the gym. [via i09