You inherit genes from Mom and Dad equally ... but new research suggests you might use some more than the others. 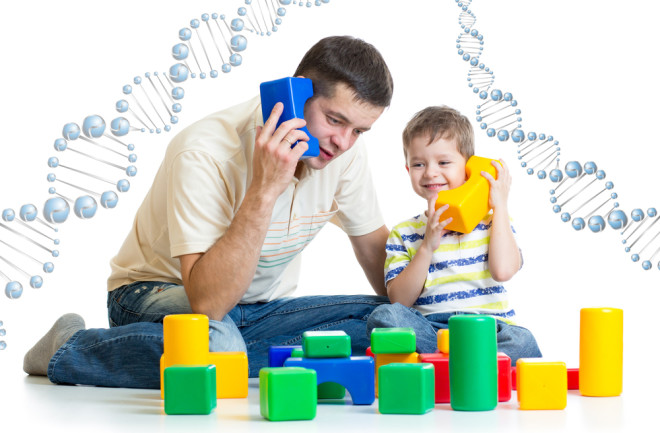 You may have inherited your mother’s eyes, but, genetically speaking, you use more DNA passed down from your father. That’s the conclusion of a new study on mice that researchers say likely applies to all mammals.

We humans get one copy of each gene from mom and one from dad (ignoring those pesky sex chromosomes) — that hasn’t changed. The same is true for all mammals. But that doesn’t necessarily mean that mom and dad genes are equally active in creating who we are.

Researchers now report that thousands of mouse genes show parent-specific effects, and that on balance, the scales are tipped in favor of dads. Studying whether this imbalance exists in humans could give scientists insights into the causes of inherited conditions like diabetes and heart disease.

Of Mice and Men

Humans, mice and many other animals shared a common ancestor some 80 million years ago; therefore, our set of genes are highly alike. Further, when mice pass their genetic material down to their offspring, the manner in which genes are turned on or off is also similar to humans.

The study looks at gene expression — that is, genes’ level of activity in producing RNA, which is the molecule that then goes on to create proteins and basically make the body function. In this study, scientists worked with a population of mice called the Collaborative Cross, which is the most genetically diverse population of mice in the world. These mice were specifically bred to mimic the genetic diversity found in human populations.

Scientists interbred three strains of these mice to create nine different types of offspring. When these mice reached adulthood, scientists measured the level of gene expression in a variety of bodily tissues. They then quantified how much gene expression was derived from the mother and the father for every single gene in the genome.

Overall, they found that most genes showed parent-of-origin effects in their levels of expression, and that paternal genes consistently won out. For up to 60 percent of the mouse’s genes, the copy from dad was more active than the copy from mom. This imbalance resulted in mice babies whose brains were significantly more like dad’s, genetically speaking.

The findings, which were published this week in Nature Genetics, add a new wrinkle into our understanding of inherited diseases. Knowing an imbalance exists in how your parents’ genes affect you could help scientists treat and predict diseases more accurately.

So, dads, next time you’re showing off those baby pictures, go ahead and boast: the little one does take after you.