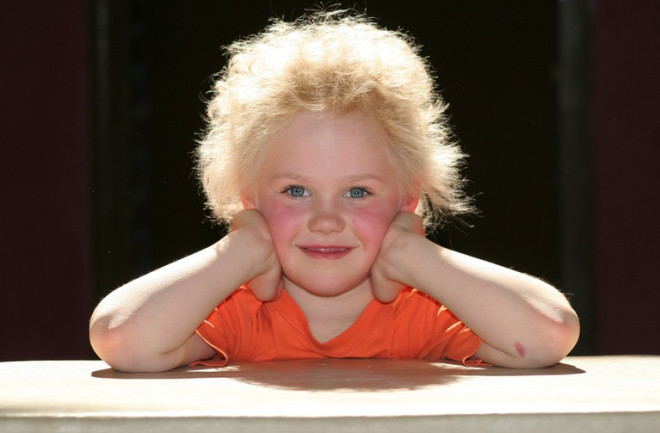 A child with uncombable hair syndrome. (Credit: University of Bonn) The next time you have a bad hair day, at least you can fix it. Be glad you don't suffer from "uncombable hair syndrome." The condition, which is usually present only in childhood, results in a tangled mess of frizzy hair that leaves the afflicted looking like they're being perpetually shocked by static electricity. The condition seems to be correlated with light-blonde hair that has a characteristic sheen to it. There have only been around 100 cases reported in the medical literature, under a variety of names. But now researchers have discovered its underlying genetic cause.

Researchers haven't paid much attention to the syndrome, but Regina Betz, from the University of Bonn, managed to find 11 children with the syndrome and sequenced their DNA, working with an international team of colleagues. After analyzing their genomes, her team identified three common mutations that were correlated with the phenomenon. The three genes are responsible for interrelated aspects of the process that gives hair its structure. One encodes for a protein that binds to keratin, a substance integral to our hair, nails and skin, and the other two produce enzymes that affect how keratin binds together in our hair. If any of these three are thrown off, our hair won't grow properly, resulting in the wild tangles that characterize uncombable hair syndrome. They published their findings Thursday in the American Journal of Human Genetics. The researchers went on to breed mice with mutations in the same genes, and say that they ended up with mice rocking wavy coats and unnaturally curly whiskers, signs that their hypothesis was on the mark. While the researchers don't suggest any cures for the condition, it shouldn't pose any real harm, so long as your child is fine with looking like a young Einstein for a few years. By examining all of the ways hair growth can go awry, scientists gain a better picture of the fundamental underpinnings of the process — something that might benefit us all.