Genetic Analysis Reveals the U.S. is Truly a Melting Pot 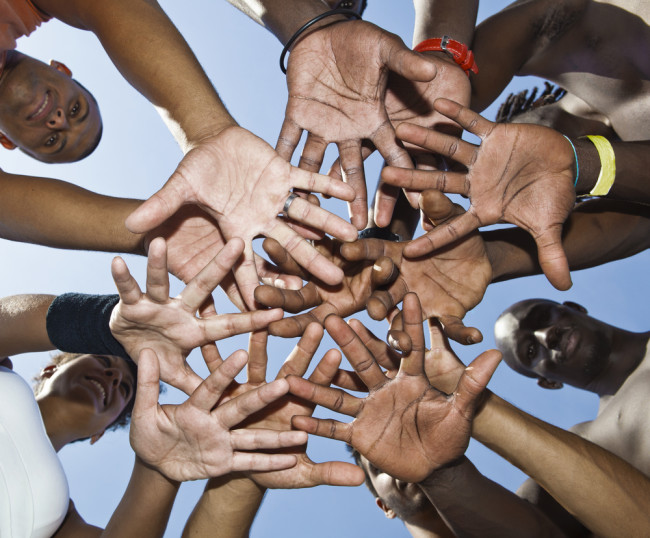 The United States is often described as a cultural melting pot. The degree to which that's true socially can be debated – and, at least as regards to race, it has been debated lots lately. But another way to look at that question could be to examine the mixing in Americans' genetic ancestry. And that's just what researchers at 23andMe, a genomics and biotech company, have done. Their analysis of 160,000 Americans revealed subtle differences in genetic ancestry as it relates to race across the United States.

Anyone interested in tracing his or her ancestry can purchase a genetic testing kit from 23andMe for $99. The company will analyze your sample and provide you with a full report detailing specific information about your DNA. Over time, 23andMe has assembled a massive database of over 800,000 genotyped customers. From this broader population researchers selected 148,700 European Americans, 8,700 Latinos and 5,200 African Americans who had consented to allow their data to be used in research. Researchers wanted to determine how people's self-identified races or ethnicities – in this case, African American, Latino, or European American – correlated with their genes, depending on which part of the U.S. they were living in. Specifically they examined traces of Native American, African, and European genomes by looking for so-called single nucleotide polymorphisms, one-letter changes in the DNA sequence.

Not surprisingly, researchers found that most people have traces of several ethnicities in their DNA, although we usually only identify as a single one when describing ourselves. What was more interesting was how this relationship varied by region, often reflecting historical events from many generations ago. The slave trade, for example, brought thousands of Africans to the United States. Most of the major slave ports in the U.S. were located in the South, which is reflected by a greater amount of African ancestry in the genomes of both white and African American people in the South. Researchers estimated that more than 5 million whites in the U.S. have at least 1 percent African ancestry in their DNA. Louisiana’s high level of African ancestry in self-identified whites is consistent with historical accounts of intermarriage in the New Orleans area. 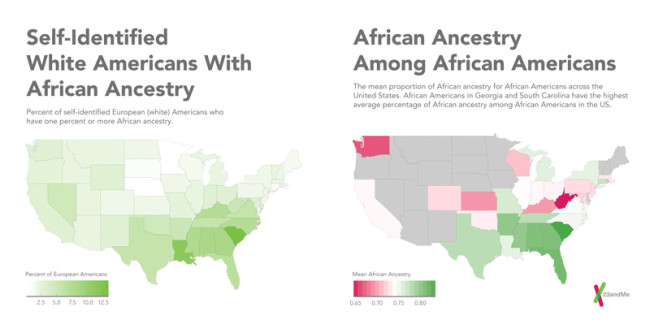 The researchers also found that more than 5 percent of African Americans carry at least 2 percent Native American ancestry. The highest proportion of African Americans with Native American ancestry was in Oklahoma, where black slaves were a significant part of the population in the 1860s and where the many Native Americans were displaced to after the Trail of Tears in the 1830s. Among Latinos, researchers found that Iberian ancestry (Spain, Portugal) was particularly pronounced in those from Florida and the Southwest U.S. Researchers believe this ratio probably reflects early Spanish influence in these regions, as well as recent immigrations from Latin America. Here are a few other quick finds from the analysis, which was published Thursday in the American Journal of Human Genetics:

This analysis has its limits. 23andMe isn’t a free service and requires an Internet connection, which are both factors influencing the data. And 23andMe chose to focus on only a few of the racial and ethnic groupings in the U.S. due to data limitations. Researchers believe they’ll learn more about the ancestry of the U.S. population as they collect more DNA data. But the results are still revealing. "Our results reveal the impact of centuries of admixture in the U.S.," the researchers write, "thereby undermining the use of cultural labels that group individuals into discrete nonoverlapping bins in biomedical contexts..." In other words, we all have a little bit of each other in our gene pools – a fact that can perhaps help spur unity in a divided modern world.