There are several papers and letters in Nature Genetics on the relationship between menarche, menopause, etc. and genetics. Meta-analysis of genome-wide association data identifies two loci influencing age at menarche:

We conducted a meta-analysis of genome-wide association data to detect genes influencing age at menarche in 17,510 women. The strongest signal was at 9q31.2 (P = 1.7 10-9), where the nearest genes include TMEM38B, FKTN, FSD1L, TAL2 and ZNF462. The next best signal was near the LIN28B gene (rs7759938; P = 7.0 10-9), which also influences adult height. We provide the first evidence for common genetic variants influencing female sexual maturation.

Loci at chromosomes 13, 19 and 20 influence age at natural menopause:

Genetic variation in LIN28B is associated with the timing of puberty:

Earlier menarche correlates with shorter adult height1 and higher childhood body fat2. We conducted a genome-wide association study of age at menarche (AAM) on 15,297 Icelandic women. Combined analysis with replication sets from Iceland, Denmark and the Netherlands (N = 10,040) yielded a significant association between rs314280[T] on 6q21, near the LIN28B gene, and AAM (effect = 1.2 months later per allele; P = 1.8 10-14). A second SNP within the same linkage disequilibrium (LD) block, rs314277, splits rs314280[T] into two haplotypes with different effects (0.9 months and 1.9 months per allele). These variants have been associated with greater adult height3, 4. The association with adult height did not account for the association with AAM or vice versa. Other variants, previously associated with height...did not associate significantly with AAM. Given the link between body fat and AAM, we also assessed 11 variants recently associated with higher body mass index (BMI)...and 5 of those associated with earlier AAM.

These work are interesting because if the genetic mechanisms by which menopause occurs are elucidated, perhaps the question of whether it is an adaptation, or not, will be resolved (or greater clarity attained). Below are some figures on the global distribution of some of the larger effect SNPs identified from the HGDP browser. rs314277 on LIN28B, with "A" variant increasing menarche by 0.0963 years. 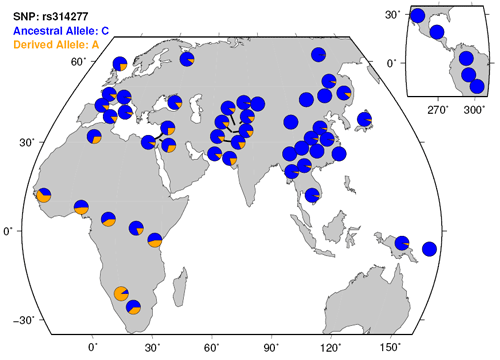 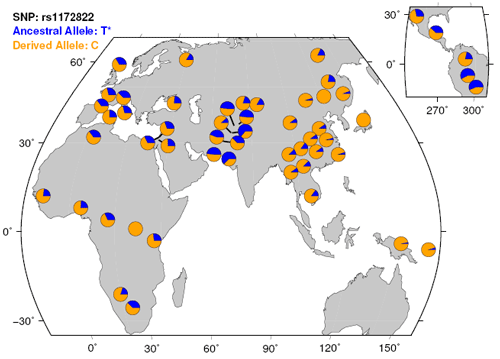 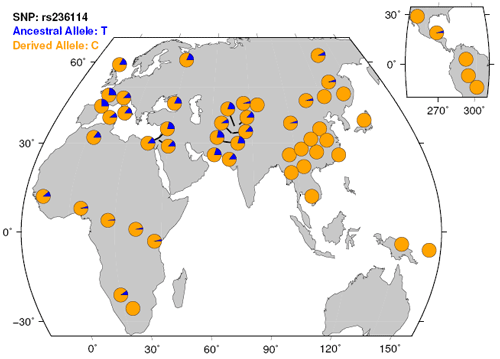 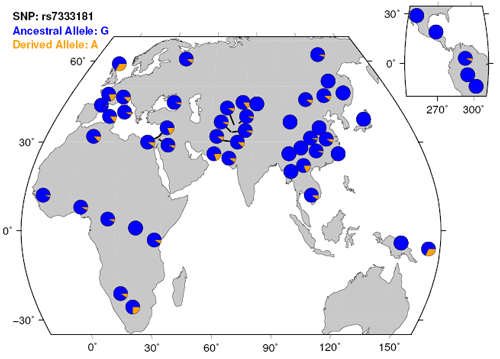 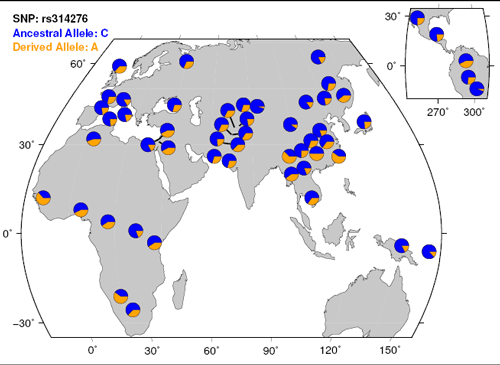 1) Be careful to compare across populations obviously. Effect sizes (or perhaps direction) might differ for a given variant. 2) The fact that these loci are implicated in lots of traits is not surprising, but intriguing. One of the arguments for the timing of menopause is that is adaptive for older women to aid in the rearing of their daughter's offspring, as opposed to risking further pregnancy. These data suggest a connection between onset of puberty and menopause. All things equal shifting the onset of puberty will have a much bigger direct fitness effect it seems to me than the secondary effects of grandmothers.