Genes are necessary, but not sufficient, for heritability

I've discussed heritability quite a bit on this weblog. Over the past 5 years of blogging on genetic topics this is the #1 issue I've been attempting to nail into the heads of readers because it is a concept which is critical in correctly modeling the world around us. It isn't an idea which is in common circulation, as evidenced by the common assertions in the press which go along the lines of "the trait is half genetic" or "the trait is mostly genetic," after reporting the heritability estimate from the original research. Part of the problem is that heritability emerges out of the quantitative genetic tradition, which is really applied statistics. But when we moderns think of genetics, we conceive of the biophysical reality of DNA, and the discrete packets of information that these transmit. When people speak of heritability then it is natural to map those values onto the idea of physical genes and conceive of the value as giving us a sense of the "geneticness" of a given trait. That's a big problem over the long term. 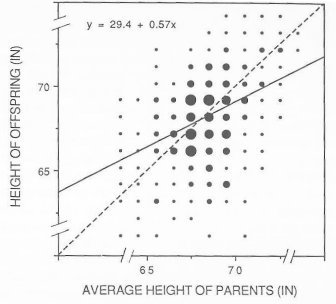 Heritability is basically a statistical concept. The chart to the left is the famous one used by Francis Galton to show the relationship between the height of parents and the height of offspring. Heritability is the slope of the line of best fit for the data. If there is a perfect fit, then heritability is ~ 1. If there is no relationship then heritability is ~ 0. Heritability tells you your expectation of the offspring trait value if you know the value of the parents. Now, if you have a trait where there is no variation then obviously heritability is an incoherent concept. If all the parents have value X and all the offspring have value X, and the whole population is of value X, then the chart to the left would simply display a point in space. That point wouldn't yield up any regression line. That does not mean that the trait is not genetic, rather, there is simply no phenotypic variation which is useful for statistical analysis. Consider cystic fibrosis. One assumes that this is a genetic disease. After all, it is a classic example of a recessive trait which has strong deleterious consequences in the homozygote. 1 out of 22 people of European ancestry carry the allele which when in a homoyzogote results in the disease. A child who has cystic fibrosis usually has parents who carry a copy of the allele responsible. There may be cases of de novo mutation, but in that case it is still genetic. But can you predict from the phenotype of the parent the phenotype of the offspring? Not really. Until recently most who suffered from cystic fibrosis died too early to reproduce, and male infertility is still a serious issue. In other words, the people whose offspring exhibit cystic fibrosis themselves do not manifest the disease. They are carriers, after all, it's recessive. This isn't a heritable trait because you can't relate parental phenotype to offspring phenotype, the parents are just like the rest of the population. But, the trait is inherited and genetic. In fact, it is likely coherent to say that the trait is "mostly" or "all" genetic because likely the upstream variables have very little to do with environment. What you have here is a problem which emerges from the diverse origins of modern genetics and its disciplinary promiscuity. There is the stream which emerges out of the seeds of statistics as a quantitative description of phenotypic variation, and attempts to partition the proportion of that variation which is due to genetic variation and that which is not (quantitative genetics). There is another stream which emerges out of Mendelian ideas which posit discrete units of inheritance from which a deductive system can be inferred (population genetics). Finally, there is the empire of more empirical genetics which is concerned with physiology and molecular biology. The genetics of the DNA revolution. Science is contingent, one if you will, and with the rise of genomics and other synthetic fields within biology I think the three streams are being mixed to beneficial effect. But, it also results in confusion of communication due to lack of lexical subtly. And so one must repeat the definitions and their contexts over and over. One could say the fact that terms like epistasis have related, but distinct, meanings in different domains of genetics is a phylogenetic constraint of the language we have to use.