Gene-culture coevolution is a topic of interest for me. Consider adult milk digestion. It's weird, and seems like a new adaptation. The lactase gene has been under such strong selection that it is often used (or the region around it) as a control to test whether new methods for detecting selection actually work where we think they should work. Here are a few maps I reworked from this paper: 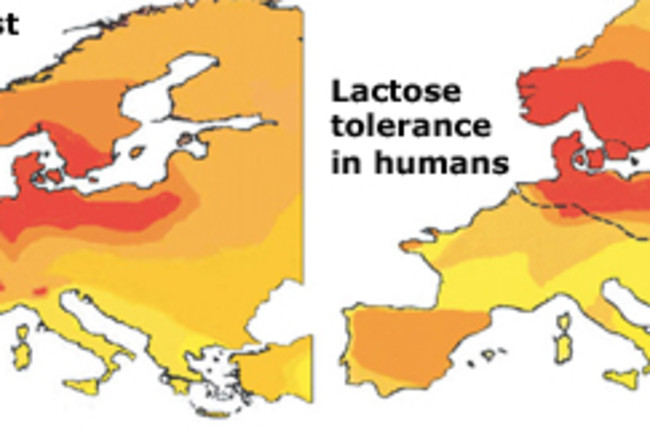 The area where cattle genes which produce milk are diverse is relevant because that is the region where milk producing cattle have likely been resident the longest. The logic is similar to why Africans are assumed to be the source population for other humans: their genetic material exhibits the extant variation of an ancient population which has been resident for a long enough period to build up mutations. Note the close correspondence! Now, recently I stumbled onto to this old paper about differences in lactose tolerance in north and south Indians. The range given seems to be about 75% lactose tolerance in northern India vs. 35% in southern India. What's going on here? Some make a phylogenetic argument: lactose tolerance is a signature of Aryan immigration. The problem with this argument is that South Asians are fundamentally closer to each other than they are to outside populations, and the vast majority of ancestry seems to derive from around the Ice Age or before. Though some exogenous genetic material can be found in northern Indians which is derived from populations to the north & west, the extent does not predict the level of lactose tolerance that we see. If one assumes that Indians were not lactose tolerant originally and it was introduced than south Indians would exhibit at least 35% admixture, while north Indians would be 75% exogenous (assuming really simple genetic models obviously). This isn't warranted by any of the other data on other loci. Additionally, the recent genomic work on the lactase genes suggests the unity of the origin of Eurasian lactase persistence. In other words, the genetic strategy in Eurasia, the T allele on LCT, appeared once, and spread (in Africa there seem to be other strategies). But if other genes don't support massive admixture between various Eurasian populations...what happened? Gene flow, and a selective sweep of a favored allele! India has many cows, and dairy is part of the diet, but this is most prevalent in the northwest where lactose tolerance has the highest penetration. When the T allele entered India its fitness was very high in the north, and less so in the south. So it rose to high frequency driven by positive selection just as it has in many other cultures.