That seems the finding of this paper, Familial Aggregation of Survival and Late Female Reproduction:

Women giving birth at advanced reproductive ages in natural fertility conditions have been shown to have superior postmenopausal longevity. It is unknown whether improved survival is more likely among relatives of late-fertile women. This study compares survival past age 50 of men with and without a late-fertile sister in two populations: Utahns born in 1800-1869 identified from the Utah Population Database and Québec residents born in 1670-1750 identified from the Programme de recherche en démographie historique. Male survival was greater for those with, rather than without, a sister reproducing after age 45, particularly among men with at least three sisters...Survival of wives was unaffected by whether their husbands had a late-fertile sister, suggesting a weak influence of unmeasured socioenvironmental factors. These results support the hypothesis that late female fertility and slow somatic aging may be promoted by the same genetic variants.

Here's Figure 1 from the paper, which shows the effect on brothers with sisters who give birth late: 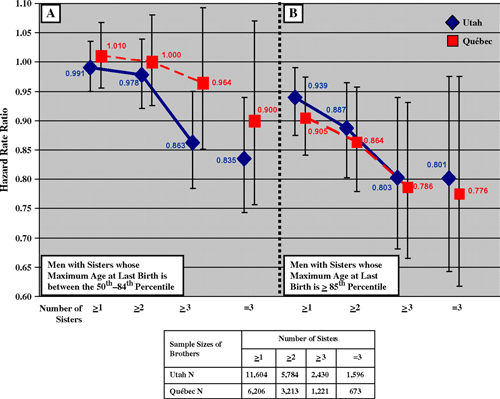 Figure 1. Mortality hazard rate ratios (HRRs) for brothers living to age 50 by age-at-last-birth of sisters who also survived to age 50 based on Cox proportional hazards models. HRR estimates are diamonds for Utah and squares for Quebec. Vertical bars represent HRR (95% confidence intervals) that adjust for familial clustering. See text for other variables controlled in the models. The comparison group comprises brothers whose sisters are all in the bottom 50th percentile. (A) Survival of men with sisters whose maximum age-at-last-birth was in the 50th-84th percentile of the female age-at-last-birth distribution. (B) Survival of men with a sister whose age at last birth is more than or equal to 85th percentile of the female age-at-last-birth distribution.

It turns out that having a late-fertile sister have a 20% lower mortality rate. Here is the discussion in full to get a good sense of the argument here:

The association reported here between increased male survival and late fertility in their sisters is consistent with the hypothesis that genetic variants exist that might simultaneously promote late female fertility and slow somatic aging. Genetic analyses of longevity may be more powerful in families with late-fertile or late-menopausal women. It may also be useful to substitute or supplement phenotyping for late fertility with phenotyping for late menopause, if it can be established that late menopause is associated with increased sibling survival to extreme ages. Mapping such genes without long-lived research participants is feasible, if heritable quantitative traits that are as good or better indicators of slow rates of aging can be measured in middle-aged individuals. Social factors as well as the hypothesized genetic factors may play a role in explaining the association between longevity and late fertility. It is possible, for example, that an individual whose sister has children late in life will have a lower risk of death at extreme ages because of social benefits conferred by the presence of younger adult kin. An individual who has long-lived siblings may also expect to have above-average longevity because of the support such siblings might provide late in life, brothers and sisters alike. Our analysis of spouse longevity suggests that socioenvironmental variables contribute less than genetic factors to the familial patterns of longevity we have observed. However, it is clear that biological relatives often share socioenvironmental factors more than nonbiological relatives, and it is not possible to definitively distinguish social and genetic transmission of longevity in these data. Nevertheless, the results presented here should encourage researchers to continue to pursue genetic analyses of slower aging and longevity in humans.

Remember that they looked at data from Utah Mormons in the 19th century and Quebecois in the 17th & 18th century, so you have two populations here. One thing that doesn't seem well addressed in this paper is the possibility that brothers and sisters share biobehavioral traits which may result in late fertility and lower mortality. I don't have a good idea of what these might be which result in women giving birth at advanced ages in Utah and Quebec during this period, but it seems well established that mortality rates are contingent upon intelligence, time preference and risk assessment abilities exhibit a causal relationships. Though to be fair there seems to be a consensus that there are genes which can affect longevity. Also see ScienceDaily.