The Properties of Adaptive Walks in Evolving Populations of Fungus:

The rarity of beneficial mutations has frustrated efforts to develop a quantitative theory of adaptation. Recent models of adaptive walks, the sequential substitution of beneficial mutations by selection, make two compelling predictions: adaptive walks should be short, and fitness increases should become exponentially smaller as successive mutations fix. We estimated the number and fitness effects of beneficial mutations in each of 118 replicate lineages of Aspergillus nidulans evolving for approximately 800 generations at two population sizes using a novel maximum likelihood framework, the results of which were confirmed experimentally using sexual crosses. We find that adaptive walks do indeed tend to be short, and fitness increases become smaller as successive mutations fix. Moreover, we show that these patterns are associated with a decreasing supply of beneficial mutations as the population adapts. We also provide empirical distributions of fitness effects among mutations fixed at each step. Our results provide a first glimpse into the properties of multiple steps in an adaptive walk in asexual populations and lend empirical support to models of adaptation involving selection towards a single optimum phenotype. In practical terms, our results suggest that the bulk of adaptation is likely to be accomplished within the first few steps.

I've discussed this issue before. The general logic here is that when a population is subject to new selection pressures it uses whatever tricks and tools are handy in the short term even if they're suboptimal in the long term. Over time adaptation should "refine" the phenotype so that there are fewer trade-offs so that fitness gradually converges upon an idealized peak. Consider the various malaria adaptations, which arose in the past 5,000 years, some of which still have major side effects such as sickle cell anemia in homozygotes. But in a malarial environment the side effects, the risk of morbidity and mortality, is worth the overall the reduction in mortality. One imagines that over time new mutations would emerge to mask the deleterious consequences of new adaptations, which are basically evolutionary kludges. They illustrate this process experimentally: 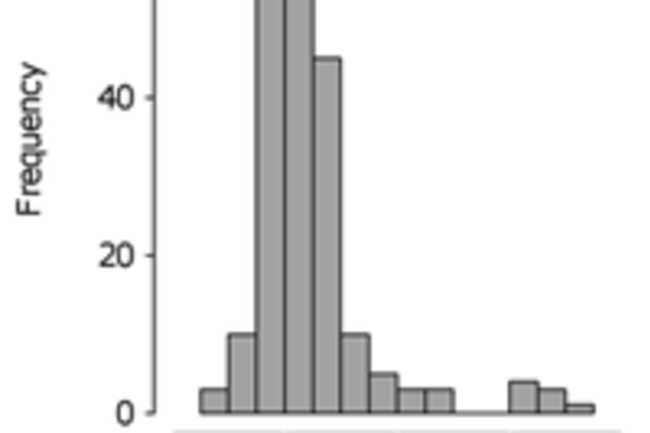 As you can see above, the early adaptive steps have the biggest effects on fitness. The later tend to have smaller effects. Though note that there is variation, so not all lineages recapitulated the trajectory of others. To the left is the full distribution of selection coefficients. These populations were obviously subject to a lot of selection experimentally, coefficients on the order of 0.10 are crazy. In the discussion they point out some interesting dynamics in relation to population size:

Interestingly, our conclusions are not much altered by the bottleneck size used between serial transfers. This result is attributable to the opposing effects of drift and clonal competition in small and large populations. In small populations, only mutations of moderate to large effect are likely to escape stochastic loss when rare, and those that do are nearly guaranteed to fix due to the absence of clonal competition. In large populations, more mutations of small effect will reach appreciable frequencies but are eventually lost due to clonal competition. The result is that the mean fitness effect of mutations that fix under different population sizes remains approximately the same at each step throughout the course of an adaptive walk. By contrast, population size does affect the mean fitness among lineages achieved by the end of the experiment, with small populations having lower fitness than large populations by the end of the experiment. This observation is consistent with our finding of fewer fixed mutations in small compared to large populations, which likely stems from changes in the mutation supply rate, Nμ (where N is population size and μ mutation rate). Importantly, even in our small bottleneck treatment, N is unlikely to be so low as to prevent sampling of a large number of single-step mutations, as required by theory

Remember that all things equal small populations are much subject to stochastic factors, and so selection can be swamped out. These populations are also "mutation limited," which means the larger populations have an advantage over the long term. The authors conclude:

Our results have two important practical implications. First, if the environment changes regularly, populations may be expected to adapt perpetually, and it will be difficult to make strong predictions as to the outcome, for example, of long-term changes to the environment such as those expected to occur under many climate change scenarios. Second, compensatory evolution in response to losses in fitness due to mutations conferring resistance to fungicides, antibiotics, or other chemotherapies, is likely to be fast, requiring only a few mutational steps. More fundamentally, the picture emerging from these experiments is that adaptive evolution in mutation-limited populations can be readily understood from rather simple models that, because they are largely based on the statistical properties of extreme events, are likely to be robust to biological details.

Over at Pleiotropy there is emphasis on the practical implications of this study:

One pleasant surprise is that the different lineages clearly did not evolve the same way. We could have expected that they would all re-evolve sensitivity to the fungicide, thereby increasing their fitness. Rather, from figure 2 we can see that fitness was increased in many different ways, and with differing results. What this indicates is that the fitness landscape in the neighborhood of the ancestral genotype is very rugged (also called epistatic), because many different fitness peaks were climbed. If they hadn't climbed different peaks, we would expect the fitness measurements to be very similar. Instead, there are many different ways to increase fitness, and further, only some include re-evolving fungicide sensitivity (only five lineages re-evolved sensitivity). I say this is a pleasant surprise because my own work with simulations suggest that fitness landscapes - which is a property of both genotype and environment - are likely to evolve to become epistatic. However, it is bad news for fighting resistant strains in general, because if the strains occupy a rugged area of the fitness landscape, they can increase their growth rate without losing their immunity to the fungicide/antibiotic/other drug.