Fundamentalists have a smaller vocabulary

In the comments below a question was asked in regards to "fundamentalist" vs. agnostic Jews. I put the quotations around fundamentalist because the term means different things in different religions. As for the idea of an agnostic Jew, remember that Jews are a nation (ethnicity) as well as a religion, and that religious belief has traditionally been less explicitly emphasized than religious practice. It wasn't too hard to find some answers in the GSS. I used the somewhat crude "BIBLE" variable again. Remember that BIBLE asks if the respondent believes that the Bible is the literal and inerrant Word of God, the inspired Word of God, or a book of fables. I reclassified these as Fundamentalist, Moderate, and Liberal, respectively. There are two variables I used in the first chart, JEW and RELIG. The former looks just as Jews, and breaks down by Orthodox, Conservative and Reform. The latter I combined with BIBLE to bracket out Fundamentalists, Moderates and Liberals of each religious group. The vocabulary test scores are from WORDSUM. Remember that they correlate 0.71 with adult IQ. Because the sample size for Jews was so small I included 95% intervals so you can modulate confidence appropriately. I limited the sample to whites. Jewish readers can correct me if I'm wrong, but I am to understand that the gap between Conservative and Reform is actually not very large in terms of belief and practice today, as it may have been in earlier decades. In fact the two movements emerge as much from cultural differences between earlier German Jewish immigrants and the later Eastern European migration. And Orthodoxy and a Protestant understanding of "fundamentalism" do not necessarily overlap. It is notable that for the other groups the Fundamentalist segment had smaller vocabularies. This probably aligns with our intuition. But I was curious, is the pattern among Protestants a regional effect? It isn't. When I controlled for region the same pattern exists. So rather than plotting that chart, I decided to look at the combination of educational attainment and Fundamentalist orientation for white Protestants only (the sample sizes here are large). 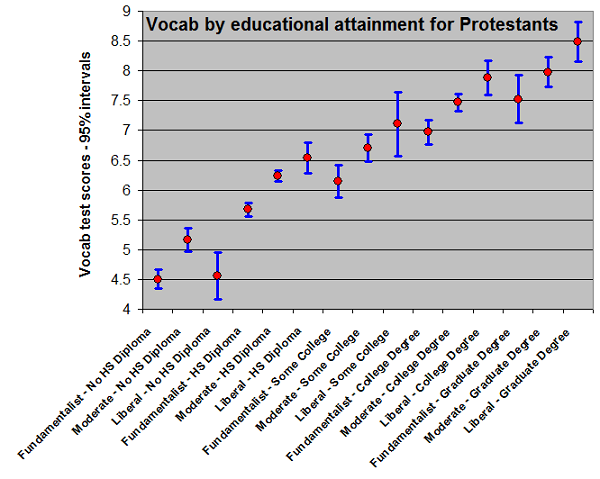 To some extent the pattern is as you'd expect. Those with less education have smaller vocabularies. But notice the step-wise pattern. Fundamentalists with a greater level of education than religious liberals do not necessarily have much larger vocabularies. That's interesting to know.