Freezing Away Your Fat: Is CoolSculpting the New Liposuction?

Cryolipolysis is an up-and-coming method for removing pesky flab, no scalpel necessary. 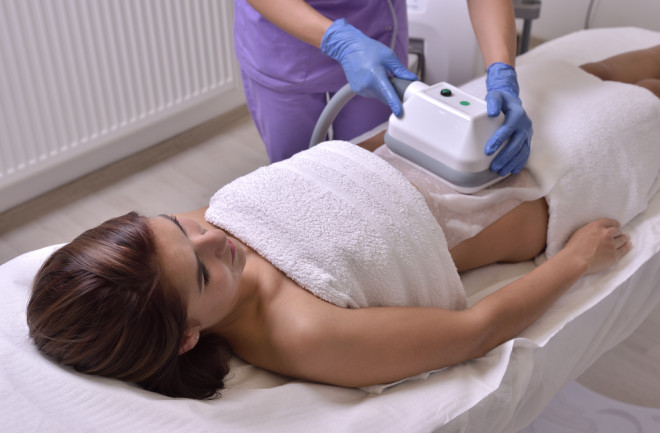 Stubborn pockets of fat often evade the best laid exercise and nutrition plans, clinging to our bodies despite our healthy habits. For years, liposuction was the last resort to rid oneself of this unwanted flesh. But in the past decade a new procedure has bypassed the needles and knives of traditional cosmetic surgery, offering a path to fat loss that, in most cases, involves no more discomfort than a chill followed by numbness.

Cryolipolysis is the technical name for the procedure, which uses cold (“cryo,” in ancient Greek) to induce fat breakdown (“lipolysis”). In general, fat cells are forever — they only shrink as you lose weight, never fully disappearing. You can, of course, physically remove them through liposuction. But now you can also kill them by lowering their temperature to the point of cell death (about -11 Celsius).

Also known by the trademark name CoolSculpting, this nonsurgical alternative requires no anaesthesia, and a single session lasts only about half an hour. “The great thing about CoolSculpting is it’s really a lunchtime procedure,” says Neera Nathan, a dermatology instructor at Harvard University. “It really is quite simple, it’s not very painful, and it’s effective.” Within three or four months of treatment, patients typically drop 15-30 percent of their fat in the targeted area.

From Popsicles to Pigs to Approval

In a sense, cryolipolysis is so simple a child can do it. Many toddlers have unwittingly discovered the phenomenon by allowing popsicles to rest too long against their cheeks, leaving them with inflamed, necrotic fat tissue. The skin covering it, however, is unharmed.

Pediatricians have known about the condition, called popsicle panniculitis, for nearly a century. But it wasn’t until the mid 2000s that the co-founders of CoolSculpting — including Nathan’s boss, Harvard dermatologist Dieter Manstein — tried to harness it for fat reduction. “He thought, ‘Why don’t we exploit this? Why don’t we try to do the same thing on the belly of an adult?’” Nathan says. “That’s how cryolipolysis was born.”

The researchers tested it first on three Yucatan pigs. The experiment confirmed that temperature-sensitive fat can be frozen without risk of skin damage, opening the door for human trials. The FDA has since approved the technology for use on love handles and bra bulge, along with fat on the upper arms, back, abdomen, buttocks, thighs, chin and beyond.

To hit these diverse problem areas, CoolSculpting has developed a series of “applicators,” which are essentially shoe-sized vacuum cleaners that suck in the fat and chill it between cooling panels. “At first it’s a little bit painful,” says Nathan, who has undergone the procedure herself. “It’s really darn cold and almost burns. But after a couple minutes, you really start to go numb.” Patients often pass the time reading, watching a movie or catching up on work.

In the weeks and months afterward, the body cleans up the dying fat cells. The immune system summons white blood cells called macrophages to the site, where they gradually break down and remove the tissue, leaving behind a trimmer figure. Assuming a healthy diet and exercise regimen, the flab should stay gone — years ago, to showcase the power of CoolSculpting, a representative of the company had only one side of his body treated, Nathan says. “You can still tell that he has fat loss there.”

When Fat Fights Back

Nathan notes that cryolipolysis is strictly for body contouring. “It is by no means meant for weight loss,” she says. “It’s for anybody who has a pocket of pinchable fat.” People trying to ditch serious weight are better off starting with lifestyle changes. Beyond that criterion, researchers are working to improve their understanding of what makes the ideal candidate, and also of who is most susceptible to adverse side effects.

The most common ones are trivial — redness, bruising, tingling, numbness. “By and large, it’s a safe treatment,” Nathan says. But in rare cases, cryolipolysis does the exact opposite of what it’s supposed to: The cold stimulates fat growth, in a process known as paradoxical adipose hyperplasia, or PAH.

No one is sure how prevalent this complication is. CoolSculpting reports an incidence of 1 in 4,000 treatment cycles (which is not to say 4,000 patients, as those cycles could be divided among any number of people). But some investigations suggest a higher rate. In one study of about 2,000 patients (who underwent nearly 8,700 cycles collectively), nine suffered from PAH, and the authors estimated the frequency at 1 in 2,000 cycles. Another study put the number at 1 in 211 patients.

For those unfortunate few, the consequences can be severe and distressing: “At this point the areas look 3 times bigger than they were before the treatment!” one young woman writes in an online review. Another says she “blew up like a balloon.” The only solution, ironically, is liposuction.

Nevertheless, the majority of patients — 73 percent, in one survey — say they’re satisfied with the outcome. Since its inception in 2010, CoolSculpting has been used in some 8 million treatments. “It’s an incredibly, incredibly popular procedure,” Nathan says. Considering the American Society of Plastic Surgeons reported about 265,000 liposuction procedures in 2019, cryolipolysis seems to have surpassed its surgical forerunner already.