For Our Own Good, Let There Be Dark

What happens when lights at night mess with our circadian rhythms — and health. 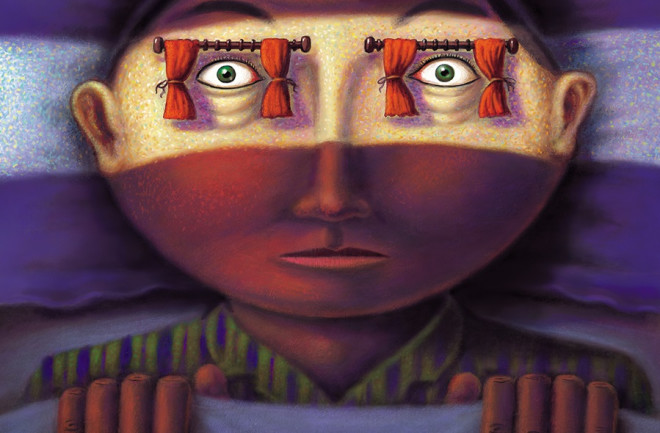 At 4:31 a.m. on Jan. 17, 1994, residents of Los Angeles were jolted awake by a 6.7-magnitude earthquake that killed more than 60 people, crumpled buildings and freeways, swallowed automobiles, ignited fires and caused a blackout. That last effect, plunging the city into darkness, prompted dozens of residents to call the city’s Griffith Observatory because of something weird they saw in the night sky: the Milky Way.

“The lights of Los Angeles were out,” recalls E.C. Krupp, the longtime director of the observatory, “so the night sky was dark for a change. People were puzzled and wondered if there was a connection between the earthquake and the strange sky. We figured out they just weren’t used to seeing so many stars.”

A global atlas of the night sky, published in June, found that 80 percent of humanity now lives under light-polluted skies. That even takes into account inky-dark countries like Chad, the Central African Republic and Madagascar. Fully one-third of us cannot see the Milky Way. In the United States, unless you are among the 19.3 percent of residents who live in a rural area, you probably know how those folks in Los Angeles felt.

But light at night — whether the orange glow of streetlights, the yellow glow of home lighting or the blue glare of television sets or smartphones — is more than a problem of aesthetics and stargazing. According to a large and growing volume of published studies, the artificial lighting at night that’s synonymous with modern civilization carries with it a dark side: increased risks of obesity, Type 2 diabetes, breast cancer, prostate cancer, depression and, perhaps most obviously, sleep loss.

That’s the working hypothesis of researchers studying the purported effects of what they call Artificial Light at Night, or ALAN. It’s not the what of light that promotes diseases, they say, but the when. Exposing the retina to light at night messes with your body’s circadian rhythm, the beat of life estimated to have evolved 2.5 billion years ago in response to Earth’s 24-hour rotation.

Algae, bacteria, fungi, plants and all other living things have clock genes designed to be kept in sync by exposure to light. In vertebrates, a master clock is located in the awesome-sounding suprachiasmatic nucleus, a tiny region of brain cells in the hypothalamus. Not by accident, that spot is directly above and linked to the optic chiasm, the X where nerve cells from the left and right eyes cross. Light signals from the eyes keep the internal circadian rhythm generated by clock genes coordinated with the environment. In mammals, the result is a finely tuned daily rhythm of not only sleep but of body temperature, the release of hormones, immune function and even digestion.

Unless, that is, you discombobulate it with one of your newfangled lighting contraptions.

Blocking Out the Light

“At my home, we have heavy drapes to block the light at night,” says Steven Hill, chairman of breast cancer research at Tulane University and widely regarded as a pioneer in the field. “And I typically sleep with a mask on. Even with your eyelids closed, a little light coming from behind your curtains will reach your retina.”

Hill co-authored one of the most startling studies in the field in July 2014, when he reported in the journal Cancer Research that the drug tamoxifen is rendered completely ineffective against human breast cancer in mice when they are exposed to dim light at night. He published another study in August 2015, showing that resistance to the chemotherapy drug doxorubicin is likewise increased by ALAN. Dozens of other studies have found that animals exposed to light at night develop tumors more readily than do those kept in the dark.

In humans, the most dramatic evidence comes from a September 2014 study in the journal Epidemiology, in which researchers examining data from the California Teachers Study found that women living in areas of California with the highest quintile of outdoor lighting, as measured by satellite imaging, have a significantly increased risk of developing breast cancer. The association was replicated earlier this year in a Korean study, using highly accurate U.S. military satellite observations of nighttime lighting.

Similar links between outdoor lighting and the rate of breast cancer diagnosis have been observed in the state of Georgia, and indeed around the world. An association in cancer rates — in this case, prostate cancer — was reported this March by researchers in Israel.

Why would hormone-sensitive cancers like those of the breast and prostate be affected by light at night, but not lung or colon cancers? It can be explained by the primary mechanism believed to mediate the relationship between ALAN and adverse health defects. Melatonin, the hormone whose name is derived from the Greek word melas (black, dark), is secreted from the brain in all animals in anticipation of nightfall, to entrain circadian rhythms — unless, that is, the retina is exposed to light, which results in the shutdown whistle getting blown at the old melatonin factory.

David Blask, a colleague of Hill’s at Tulane who runs the Laboratory of Chrono-Neuroendocrine Oncology there, has been studying the effects of melatonin on cancer for almost 40 years. One of his latest studies, published in 2015, found that exposure to bright blue-white light during the day has the opposite effect of light exposure at night: It greatly enhances the release of melatonin and inhibits the proliferation of prostate cancer cells in an animal model.

“We evolved to see bright blue, full-spectrum light during the day and to have complete blackness at night,” Blask says. “Both are really healthy for your circadian system. It’s all about this oscillatory balance under natural conditions between light and dark.”

In a 2005 study, he described what happened when he took melatonin-depleted blood from premenopausal women who had been exposed to light at night and infused it through human breast cancer xenografts in nude rats. The cancer, he found, grew faster.

But cancer is far from the only adverse effect thought to be associated with exposure to light at night. Randy Nelson, professor and chairman of neuroscience at Ohio State University Wexner Medical Center, has published more than two dozen studies done in mice and hamsters showing that light at night increases body weight and anxiety-like behaviors. Satellite studies of outdoor lighting have also found an increased risk of obesity in humans who live in highly lit areas. Hill has co-authored a paper suggesting that the reduced melatonin expression researchers had already associated with aging, and the accompanying loss of circadian rhythms, may underlie the increased risk of virtually all diseases in older adults.

Tired of hearing what light at night may or may not do, younger scientists are clamoring for greater precision — beyond the laboratory setting — in measuring light exposure, melatonin levels and their relationship to disease states.

“You’ve got to know what your quantities are,” says Mariana Figueiro, a professor at the Lighting Research Center at Rensselaer Polytechnic Institute in Troy, N.Y. Speaking in March at a conference on circadian disruption by the National Institute of Environmental Health Sciences, Figueiro called on the field to step up its game. “Until you know the amount of light you’re talking about, the dose, you can’t really say much about the effects. Some researchers will say, ‘Oh my God, if you open up the refrigerator at night you’re going to die from that light.’ ”

Based on her dozens of studies in the field of chronobiology, Figueiro says she finds it implausible that dim light coming through a window shade, or from under a bedroom door, could possibly be bright enough to suppress melatonin — particularly when a person’s eyes are closed during sleep.

“If you’re living in an area with more street light, you’re likely to have more of a night life,” she says. “You probably stay up later, eat later, drink later. That doesn’t mean that the streetlight itself is causing cancer.”

Another researcher seeking to bring increased rigor to the field is Eva Schernhammer, associate professor in the Department of Epidemiology at the Harvard School of Public Health. Despite having published three dozen studies on the hormone, she says, “we still do not know enough about melatonin. We have imperfect measures for doing research on its effects. If you take a morning urinary measure of melatonin, for instance, that gives you only the average level during the entire night.”

Although Italian researcher Paolo Lissoni has published studies suggesting that melatonin supplementation appears to improve cancer survival, Schernhammer says, “the problem with his papers is they haven’t really randomized people properly. They leave you with a bit of a question mark.”

To find out if avoiding light at night truly reduces disease risk, or if an evening dose of melatonin has the same benefit, large and properly randomized trials are necessary. But to convince funding agencies that such trials are warranted, Schernhammer says, existing data from smaller studies first need to be pooled and analyzed.

“We submitted a proposal to pool worldwide data on melatonin and breast cancer risk,” she says. “A pooled analysis would allow us to either put the melatonin story to rest or to have the data necessary to support a large randomized trial. But the National Cancer Institute wasn’t interested.”

For now, about all that researchers are certain of is that artificial light at night distorts our circadian rhythms and is associated with all sorts of bad health outcomes, perhaps for no other reason than that we’re up and about, eating and drinking, at a time when we should be sleeping.

Whether a lifestyle in remote Madagascar, enjoying bright light by day and deep darkness by night, will directly result in reduced risk of cancer, obesity, depression and more remains unproven.

But it sure will make for a suprachiasmatic view of the Milky Way.

[This article originally appeared in print as "Let There Be Dark."]

More From Discover
Health
Are the Effects of Cannabis and Alcohol in the Body the Same?
Health
The Science Behind Cold Water Plunges
Health
The Surprising History of the Bidet Started with the Wealthy and Brothels
Health
Year-Round Daylight Savings Could Threaten Our Sleep and Heart Health
Health
Navigating Hearing Loss And New Over-the-Counter Solutions
Health
How Ultra-Processed Foods Can Affect Your Mental Health
Recommendations From Our Store
My Science ShopDiscover STEM Kits
My Science ShopDiscover 2022 Calendar
My Science ShopStrange Science
My Science ShopElements Flashcards
Shop Now
Stay Curious
Join
Our List