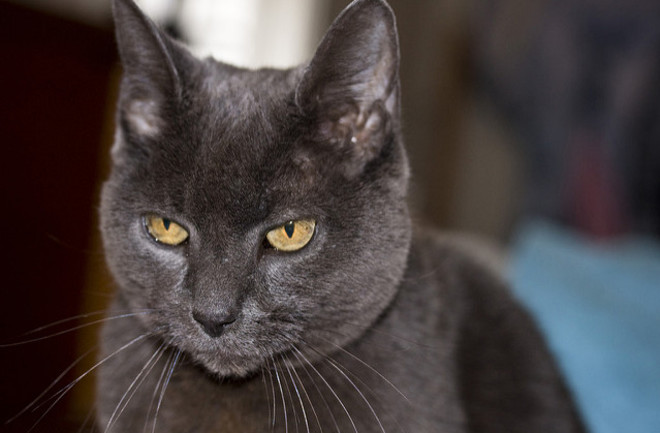 Photo: flickr/liz westIf you’re a cat owner, then you probably have a pretty good sense of whether your cat is happy, angry, or frustrated. But do cats, like humans, actually have common “facial expressions” that accompany these emotions? People have actually been studying questions like this for decades (and even back to Charles Darwin), but not always in a scientifically rigorous manner. Enter these scientists, who set out to create a “facial coding system” for cats, which they term “CatFACS” (fortunately not related to putting cats into a flow cytometer). This type of framework can help link up behaviors and emotions in cats, as well as other related animals. Be sure to check out the figure below for a handy guide to cat expressions!Facial correlates of emotional behaviour in the domestic cat (Felis catus). “Leyhausen’s (1979) work on cat behaviour and facial expressions associated with offensive and defensive behaviour is widely embraced as the standard for interpretation of agonistic behaviour in this species. However, it is a largely anecdotal description that can be easily misunderstood. Recently a facial action coding system has been developed for cats (CatFACS), similar to that used for objectively coding human facial expressions. This study reports on the use of this system to describe the relationship between behaviour and facial expressions of cats in confinement contexts without and with human interaction, in order to generate hypotheses about the relationship between these expressions and underlying emotional state. Video recordings taken of 29 cats resident in a Canadian animal shelter were analysed using 1-0 sampling of 275 4-s video clips. Observations under the two conditions were analysed descriptively using hierarchical cluster analysis for binomial data and indicated that in both situations, about half of the data clustered into three groups. An argument is presented that these largely reflect states based on varying degrees of relaxed engagement, fear and frustration. Facial actions associated with fear included blinking and half-blinking and a left head and gaze bias at lower intensities. Facial actions consistently associated with frustration included hissing, nose-licking, dropping of the jaw, the raising of the upper lip, nose wrinkling, lower lip depression, parting of the lips, mouth stretching, vocalisation and showing of the tongue. Relaxed engagement appeared to be associated with a right gaze and head turn bias. The results also indicate potential qualitative changes associated with differences in intensity in emotional expression following human intervention. The results were also compared to the classic description of “offensive and defensive moods” in cats (Leyhausen, 1979) and previous work by Gourkow et al. (2014a) on behavioural styles in cats in order to assess if these observations had replicable features noted by others. This revealed evidence of convergent validity between the methods However, the use of CatFACS revealed elements relating to vocalisation and response lateralisation, not previously reported in this literature.” Bonus figure from the main text: