Flashback Friday: When it comes to penis length and economic growth, size does matter.

Male organ and economic growth: does size matter? "This study explores the link between economic growth and penile length between 1960 and 1985. It estimates an augmented Solow model utilizing the Mankiw-Romer-Weil 121 country dataset. The size of male organ is found to have an inverse U-shaped relationship with the level of GDP in 1985. Economic development between 1960 and 1985 is negatively associated with the size of male organ. With considerable reservations it is also found to be a more important determinant of GDP growth than country's political regime type. Two interpretations for the patterns between male organ and economic growth are discussed briefly: the link between penile length, testosterone and risk-taking, and self- esteem production. Despite the robust statistical links, until more rigorous treatments on the subject the proposed ‘male organ hypothesis’ should be taken with reservations. " 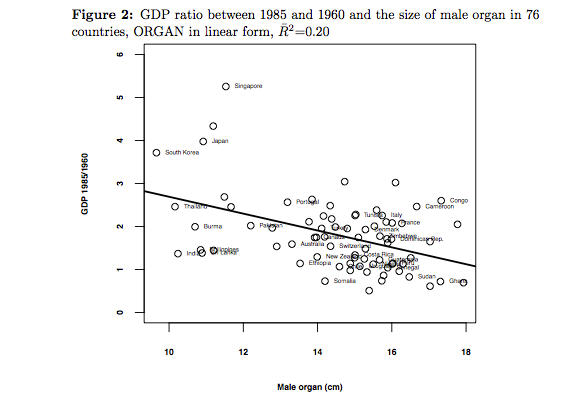 In the world of correlations, this one's a doozy: in 2011, a Finnish economist found a relationship between penis length and GDP in different countries. More specifically, as the GDPs got larger, the penises got smaller (or vice versa?). The author suggests that the trend could be related to the effects of testosterone and/or penis size on risk-taking or self-esteem. Unfortunately, there's not much that can be done to change this particular phenomenon. But as he goes on to point out, "It clearly seems that the ‘private sector’ deserves more credit for economic development than is typically acknowledged."

Bonus quotes from the main text

[NB: Since we originally published on this article, the author has revised what he terms the "generously infantile-punned draft" to be more adult and serious. Below we give you quotes from the original text, which can now only be obtained from the author.] “Only stylized explanations for these perplexing patterns can be brought up at this point. One discussed below revolves around the proposed aggregate ‘self-esteem production function’ which could potentially explain the inverted relation between GDP and penile length. Taken at face value the findings suggest that the ‘male organ hypothesis’ put forward here is quite penetrating an argument. Yet for the best of author’s knowledge, male organ has not been touched in the growth literature before.” “The data regarding the physical dimensions of male organs is openly available online and has been compiled [by an unknown party] from an extensive number of sources. Large part of the data has been collected by health authorities but some observations are self-reported. Due to the sensitive nature of the subject matter, self-reported data might be biased, supposedly upwards. However, a moment of reflection with the global penile length distribution map and anecdotal ‘Internet-sourced evidence’ reveals that the self-reported figures are in-line with anticipated patterns. Still, measurement errors can not be ruled out.” “For obvious reasons the male organ narrative yields little in terms of feasible policy recommendations. Beyond mass [im]migration, not much can be done on the average size of male organ at the population level.” “Even with the reservations outlined above the ‘male organ hypothesis’ is worth pursuing in future research. It clearly seems that the ‘private sector’ deserves more credit for economic development than is typically acknowledged.” Related content: NCBI ROFL: Does ass size correlate with penis length? The answer may surprise you!NCBI ROFL: Should the definition of micropenis vary according to ethnicity?NCBI ROFL: 8% of Swedish men are peeping Toms.