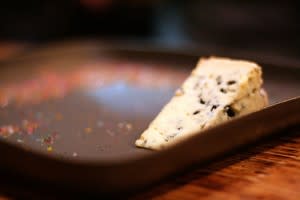 Mmmm... cheese! Who can resist the salty, sweaty, stinky-feet flavors of cheese? Apparently, no one, including murderers and burglars in the middle of a job. These two case studies are pretty awesome examples of how far modern forensics has come. The first describes how DNA evidence obtained from bitten cheese was used to identify a burglar, and the second actually used the tooth imprints in the cheese to nail a murderer. Behold the power of cheese!Saliva from cheese bite yields DNA profile of burglar: a case report. "Physical evidence in the form of a high quality bite mark was discovered on a piece of yellow cheese found at the scene of a crime. The cheese had been frozen by police for 10 days after recovery and before submission to the laboratory for testing. The double swab technique was used to collect DNA samples. A sample of the suspect's blood was obtained. Using PCR-based DNA typing at ten STR loci, (Profiler Plus, Perkin Elmer-Applied Biosystems) it was determined that the DNA from the cheese originated from the suspect. This case illustrates the importance of a) always considering human bite marks as both physical and biological evidence, and b) attempting DNA recovery in any case in which minute traces of saliva may be present, even in situations involving bacteria-rich foods." Comparison microscope identification of a cheese bitemark: a case report. "Police investigating the murder of a farmer recovered a piece of cheese containing bite- marks. The local dental practitioner used white plaster to make casts of the bitemarks in the cheese and also of the teeth of three suspects. The cheese specimen was retained by the police and seven months later the case was referred to the Forensic Odontology Unit at the University of Pretoria where a silicone rubber cast of the bitemarks in the cheese was made. A lack of concordant features present in a conventional pattern-associated comparison was overcome with the aid of a Leica DMC comparison microscope. Individual features observed under 6.3x magnification aided in the positive identification of the suspect, who when confronted with the evidence, admitted guilt at his first court appearance."

Related content: Discoblog: NCBI ROFL: I wish I could add "artificial saliva" to this abstract.

Discoblog: NCBI ROFL: But I want to eat my cheese-pie now!