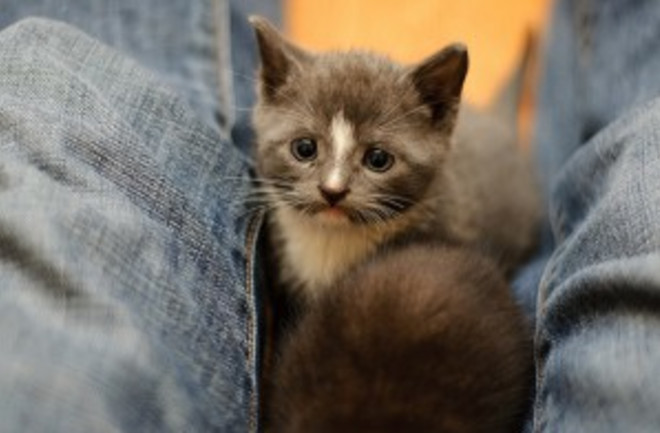 Image: Flickr/Alan HuettWe're pretty sure this post is going to be hated by all the feline fanciers out there, but this study is just too good not to share. Here, researchers applied a test developed for use with children to investigate the relationships between cats and their humans. The SST can determine whether children, and apparently animals, view their caregivers as a source of safety in a threatening environment. It turns out that using this metric, dogs are "securely attached" to their owners, but cats are "not necessarily dependent on others to provide a sense of security and safety." But that doesn't mean their owners aren't dependent on their cats for warm fuzzies in a crazy world!Domestic Cats (Felis silvestris catus) Do Not Show Signs of Secure Attachment to Their Owners. "The Ainsworth Strange Situation Test (SST) has been widely used to demonstrate that the bond between both children and dogs to their primary carer typically meets the requirements of a secure attachment (i.e. the carer being perceived as a focus of safety and security in otherwise threatening environments), and has been adapted for cats with a similar claim made. However methodological problems in this latter research make the claim that the cat-owner bond is typically a secure attachment, operationally definable by its behaviour in the SST, questionable. We therefore developed an adapted version of the SST with the necessary methodological controls which include a full counterbalance of the procedure. A cross-over design experiment with 20 cat-owner pairs (10 each undertaking one of the two versions of the SST first) and continuous focal sampling was used to record the duration of a range of behavioural states expressed by the cats that might be useful for assessing secure attachment. Since data were not normally distributed, non-parametric analyses were used on those behaviours shown to be reliable across the two versions of the test (which excluded much cat behaviour). Although cats vocalised more when the owner rather the stranger left the cat with the other individual, there was no other evidence consistent with the interpretation of the bond between a cat and its owner meeting the requirements of a secure attachment. These results are consistent with the view that adult cats are typically quite autonomous, even in their social relationships, and not necessarily dependent on others to provide a sense of security and safety. It is concluded that alternative methods need to be developed to characterise the normal psychological features of the cat-owner bond." Related content: Optimizing the sensory characteristics and acceptance of canned cat food: use of a human taste panel.Scientists make “species-appropriate” music just for cats. Listen here!Contrary to what your cats would have you believe, they do recognize your voice.

3 Steps To Get Tight & Toned For A Lasting Transformation

More From Discover
Health
How To Avoid Food-Borne Illness
Sponsored
Health
Leptitox Reviews - Is It Worth the Money? (Cheap or Legit?)
Health
What Are The Effects of Delta 8 THC? Here’s the Ultimate Guide
Recommendations From Our Store
My Science ShopCosmos: Possible Worlds
My Science ShopStrange Science
My Science ShopEinstein's Universe
My Science ShopElements Flashcards
Shop Now
Stay Curious
Join
Our List