Flashback Friday: Sorry, no matter how long you soak your feet in vodka, you will never get drunk. 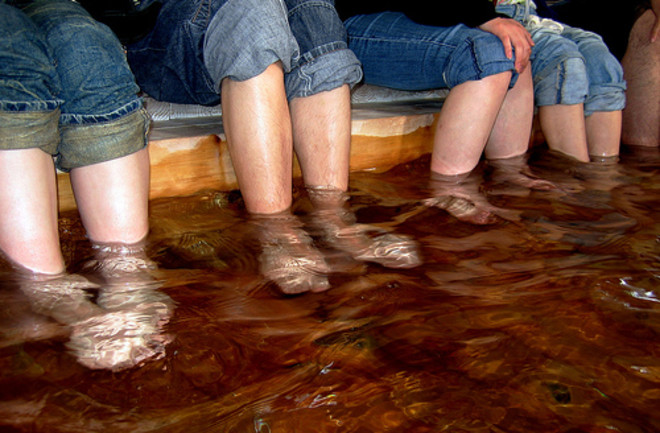 Photo: flickr/ hildgrimApparently, it's "common knowledge" in Denmark that you can get drunk by soaking your feet in vodka. But is this true, or is this just another stupid urban legend? Well, for the good of humanity, these three doctors did the experiment to find out -- on themselves. While soaking their feet in two liters of vodka, they measured their blood alcohol levels and checked for drunken behaviors every 30 minutes. Unfortunately, to the despair of everyone everywhere, the doctors were not able to detect any absorption of alcohol through their feet. However, no doubt they went home with some pretty awesome foot-infused vodka. Yum!Testing the validity of the Danish urban myth that alcohol can be absorbed through feet: open labelled self experimental study. “Objective: To determine the validity of the Danish urban myth that it is possible to get drunk by submerging feet in alcohol… The primary end point was the concentration of plasma ethanol (detection limit 2.2 mmol/L (10 mg/100 mL)), measured every 30 minutes for three hours while feet were submerged in a washing-up bowl containing the contents of three 700 mL bottles of vodka. The secondary outcome was self assessment of intoxication related symptoms (self confidence, urge to speak, and number of spontaneous hugs), scored on a scale of 0 to 10. Plasma ethanol concentrations were below the detection limit of 2.2 mmol/L (10 mg/100 mL) throughout the experiment. No significant changes were observed in the intoxication related symptoms, although self confidence and urge to speak increased slightly at the start of the study, probably due to the setup. Our results suggest that feet are impenetrable to the alcohol component of vodka. We therefore conclude that the Danish urban myth of being able to get drunk by submerging feet in alcoholic beverages is just that; a myth. The implications of the study are many though.” Related content: Discoblog: NCBI ROFL: Spring break: Prairie vole edition! Discoblog: NCBI ROFL: I swear I haven’t been drinking, Officer. It was my gut flora! Discoblog: NCBI ROFL: Binge drinking: also a problem for our teenage rats.