Flashback Friday: Physicists explain why it's so hard to walk with a cup of coffee. 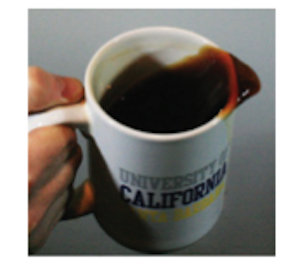 Did you know there's an area of physics called "sloshing dynamics"? Although it more often focuses on topics like rocket fuel in tanks, these physicists have applied their knowledge of sloshing dynamics to the common problem of walking with coffee. (Which is, undoubtedly, completely unrelated to the fact that scientists apparently drink the most coffee of any profession.) To explore this problem, they conducted experiments in which people walked at different speeds with varying amounts of coffee in mugs. They found that most spills happen because we are simply moving too quickly given how full our mugs are. This greediness is not because scientists are addicted to coffee, but rather is due to "the particular range of sizes of common coffee cups, which is dictated by the convenience of carrying them and the normal consumption of coffee by humans." In other words, if you don't want to spill your coffee, don't fill it so high and don't walk so fast. You're welcome.

Walking with coffee: Why does it spill? “In our busy lives, almost all of us have to walk with a cup of coffee. While often we spill the drink, this familiar phenomenon has never been explored systematically. Here we report on the results of an experimental study of the conditions under which coffee spills for various walking speeds and initial liquid levels in the cup. These observations are analyzed from the dynamical systems and fluid mechanics viewpoints as well as with the help of a model developed here. Particularities of the common cup sizes, the coffee properties, and the biomechanics of walking proved to be responsible for the spilling phenomenon. The studied problem represents an example of the interplay between the complex motion of a cup, due to the biomechanics of a walking individual, and the low-viscosity-liquid dynamics in it.” Bonus figure from the main text: 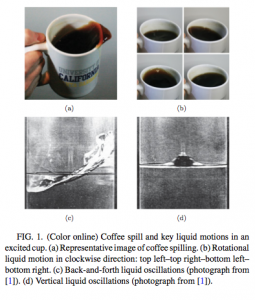 Related content: What happens when you give a sadist a cup of bugs and a coffee grinder?NCBI ROFL: Wish you could get drunk without blacking out? Next time, have a coffee.NCBI ROFL: Sex differences in preferences for coffee sweetness among Japanese students.