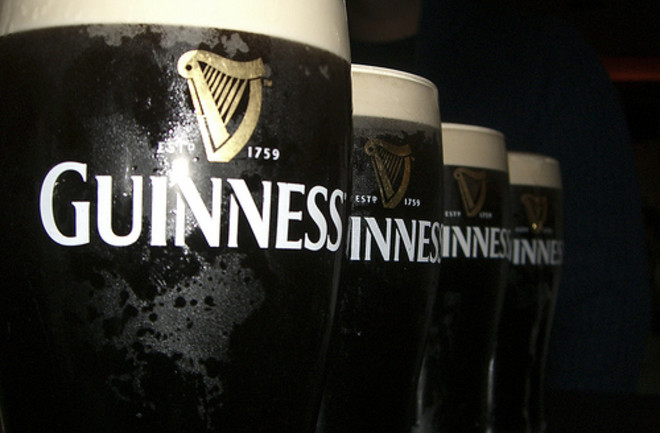 It's a common "fact" often bandied about: the Guinness that you are served in Ireland tastes better than the stuff you can get elsewhere. But is that actually true, or is it just another factoid? Well, a selfless team of four international primary care researchers (who called themselves the “Brisbane Initiative”) took it upon themselves to travel the world to drink Guinness and find the Truth! This team of Guinness "experts" (see below for their self-proclaimed qualifications) took their task very seriously, consuming 103 beers in 14 different countries in a single year. Brisbane Initiative, we salute you!

Does Guinness travel well? "This study aimed to test the much-pronounced but poorly supported theory that "Guinness does not travel well." A total of 4 researchers from 4 different countries of origin traveled around the world for 12 mo to collect data on the enjoyment of Guinness and related factors. The main outcome was measured on a Visual Analogue Scale (VAS) from 0 (enjoyed it not at all) to 100 (enjoyed it very much). A total of 103 tastings were recorded (42 in Ireland, 61 elsewhere) in 71 different pubs spread over 33 cities and 14 countries. The enjoyment of Guinness consumed in Ireland was rated higher (74 mm VAS) than outside Ireland (57 mm; P < 0.001). This difference remained statistically significant after adjusting for researcher, pub ambience, Guinness appearance, and the sensory measures mouthfeel, flavor, and aftertaste. This study is the first to provide scientific evidence that Guinness does not travel well and that the enjoyment of Guinness (for our group of nonexpert tasters) was higher when in Ireland. Results, however, are subject to further verification because of limitations in the study design."

If you are left wondering why it might be that Guinness really does taste better in Ireland, we are sorry to say that this study doesn't directly answer that important question. But here some interesting thoughts on the subject from the authors (from the Discussion section of the full text):

"Several theories exists which could explain our results. The first of these is what is called the “conspiracy” theory, which suggests that the brewery produces 3 different qualities of Guinness: the finest quality is given to its own employees, the second best is sold to the people of Ireland, and the worst is exported. We did include testing at the Guinness brewery in Dublin to investigate this phenomenon, but overall enjoyment scores were not the highest ranked, possibly because the brewery does not have the typical ambiance of an Irish Pub. This ambience underpins the second theory that states that the atmosphere of the pub is crucial. This “craic” theory (the Irish term for good times) suggests that it is undoubtedly the ambience of the Irish pub and the charisma of the Irish as hosts that make the drinking of Guinness in Ireland such an unforgettable experience. We found some evidence to support this theory as ambience did explain some of the variance of overall enjoyment scores. The final theory, the “line” theory, suggests that the regularity at which pints of Guinness are pulled in pubs in Ireland ensure that patrons are not receiving Guinness that has been sitting in the “line” (the conduit from barrel to tap) for any amount of time and thus are assured of a fresh and creamy pint at all times. Again, we found some evidence to support this theory as appearance and creaminess, which are both linked to freshness, were also higher for pints consumed in Ireland." Author qualifications as stated in the publication: "The 4 researchers came from countries that have a long tradition in beer brewing and drinking: (1) one from the home land of Guinness, Ireland (LG); (2) one from one of the most important markets of Guinness, England (CM); (3) one from the country that is the origin of the best selling lager beer in the world, the Netherlands (JC); (4) one from the country that has the oldest food and drink regulation in the world, Germany (the “Reinheitsgebot” from 1516 regulates the ingredients of beer) (DK). The researchers were between 28 and 40 y of age, generally like beer (including but not solely Guinness), and enjoy a pint on average on a weekly basis without, however, advocating excessive or binge drinking." Related content: Study finds men are more likely to think a woman’s a floozy if she’s just sitting next to a beer.Electronic tongue can distinguish between 51 types of beer.Virtual reality beer belly makes you feel fatter in real life.