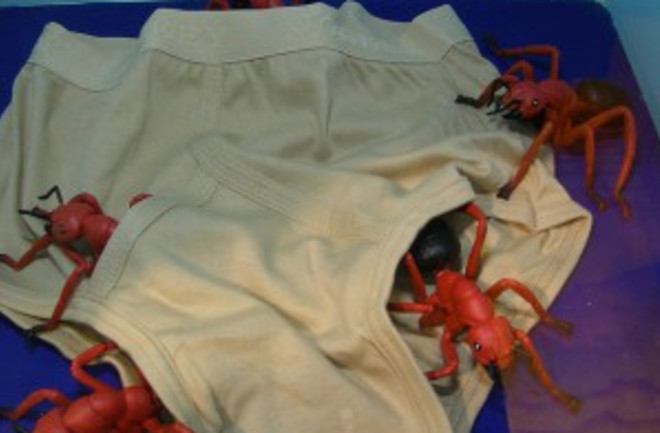 You know the saying "to each his own"? Well, that definitely applies to fetishes. From getting hit by by a car driven by a woman to getting turned on by photos from an online dermatology atlas, we've covered many case studies describing unusual sexual desires. But this one might take the cake - a description of a young man with formicophilia, which is defined as "the sexual interest in being crawled upon or nibbled by small insects, such as ants." At last, someone who likes ants in his pants... literally!

Transcultural sexology: formicophilia, a newly named paraphilia in a young Buddhist male. Children whose species-specific, juvenile sexual rehearsal play is thwarted or traumatized are at risk for developing a compensatory paraphilia. The case of a Buddhist male exemplifies the cross-cultural application of this principle. His syndrome, formicophilia, was endogenously generated without reference to or influence by commercial pornography. The complete causal explanation of paraphilia will require both a phylogenetic (phylismic) and an ontogenetic (life-history) component. The treatment of paraphilia may combine an antiandrogenic hormone with sexological counseling. Related content: Insect fossil porn: Jurassic edition.NCBI ROFL: Don't blame necrophiliacs–they're just devolving into amoebae.NCBI ROFL: References to the paraphilias and sexual crimes in the Bible.