Flaming Rocks That Ignited in Woman's Pocket Were Coated in Phosphorus 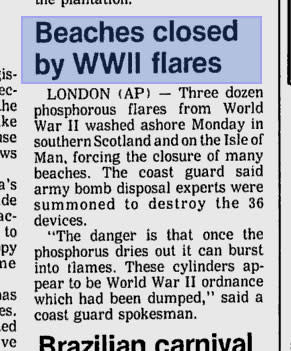 Flares have been washing up on beaches for a long time: an AP news item from February 23, 1993

Last week, several small stones in the pocket of a California woman's shorts exploded into flame

, leaving her with third-degree burns. The stones came from a beach at San Onofre State Beach in San Diego, which she'd visited earlier in the day. The story caused a sensation

, as media discussed what could make rocks catch on fire

. By Friday, California environmental health officials had an answer, or at least part of one: two of the rocks were covered in phosphorus, an element that's known for igniting into a fierce white flame when it's exposed to air. Near as they can tell, as long as the rocks were wet with seawater, the phosphorus didn't ignite, but after they'd dried out in the woman's pockets over the course of the day, the phosphorus reacted explosively. But how did the rocks get covered with phosphorus? Though the substance is mined and used in fertilizers, it isn't very common in in the natural world in its explosive form, called white phosphorus

. White phosphorous does, however, have a long history of production by militaries, who use it in flares

. Unexploded military flares, presumably dropped by aircraft, have been known to wash up on beaches: Just last year flares washed up on a beach a half-hour's drive from San Onofre. NBC reported

that those flares were from military exercises going on off the coast. There's no word whether the beach where the rocks came from has ever had military flares wash ashore. But if flares can appear on a beach a half-hour south, they could easily have washed up at San Onofre. Camp Pendleton, the primary Marine Corps base on the west coast, is close by. The local environmental health officials have posted no information about the case on their website

. But we hope they are investigating where this phosphorus came from, and fast, in case there are more pocket time bombs elsewhere along the coast.