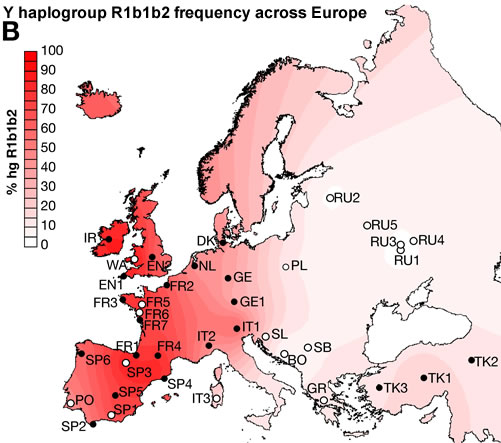 The image above is adapted from the 2010 paper A Predominantly Neolithic Origin for European Paternal Lineages, and it shows the frequencies of Y chromosomal haplogroup R1b1b2 across Europe. As you can see as you approach the Atlantic the frequency converges upon ~100%. Interestingly the fraction of R1b1b2 is highest among populations such as the Basque and the Welsh. This was taken by some researchers in the late 1990s and early 2000s as evidence that the Welsh adopted a Celtic language, prior to which they spoke a dialect distantly related to Basque. Additionally, the assumption was that the Basques were the ur-Europeans. Descendants of the Paleolithic populations of the continent both biologically and culturally, so that the peculiar aspects of the Basque language were attributed by some to its ancient Stone Age origins. As indicated by the title the above paper overturned such assumptions, and rather implied that the origin of R1b1b2 haplogroup was in the Near East, and associated with the expansion of Middle Eastern farmers from the eastern Mediterranean toward western Europe ~10,000 years ago. Instead of the high frequency of R1b1b2 being a confident peg for the dominance of Paleolithic rootedness of contemporary Europeans, as well as the spread of farming mostly though cultural diffusion, now it had become a lynch pin for the case that Europe had seen one, and perhaps more than one, demographic revolutions over the past 10,000 years. This is made very evident in the results from ancient DNA, which are hard to superimpose upon a simplistic model of a two way admixture between a Paleolithic substrate and a Neolithic overlay. Rather,

. We need to be careful of overly broad pronouncements at this point, because as they say this is a "developing" area. But, I want to go back to the western European fringe for a moment. As I stated above the Basques were long used as a Paleolithic "reference" by historical geneticists. That is, the deviation of a population from the Basques would be a good measure of how much admixture there had been from post-Paleolithic sources. Connections between Iberian populations and those of western and northern Europe were used to trace expansions out of the ecological refuges of modern humans during the Last Glacial Maximum ~20,000 years ago. Just goes to show how reliant we are on axioms which are squishier than we'd like to think. Last fall I posted a result from Dodecad on the difference between French and French Basques (both from the HGDP). I've replicated this myself a few times now too: 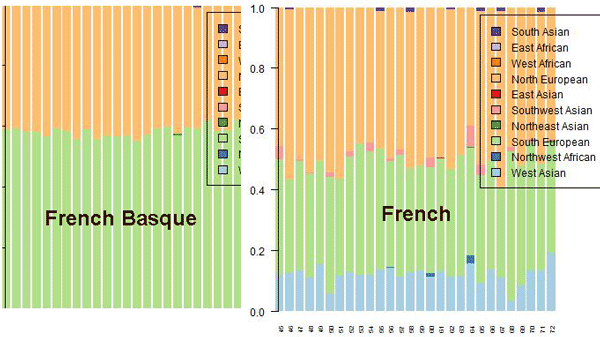 The striking aspect is that the Basque are less cosmopolitan than the other French. This is evident in most of the runs of the HGDP Basque; they just have a "simpler" genetic heritage than other Western Europeans. Today Dienekes posted some results from the IBS Spanish data set in the 1000 Genomes. He suggests there are clearly a few Spanish Basques in there (I've highlighted them): 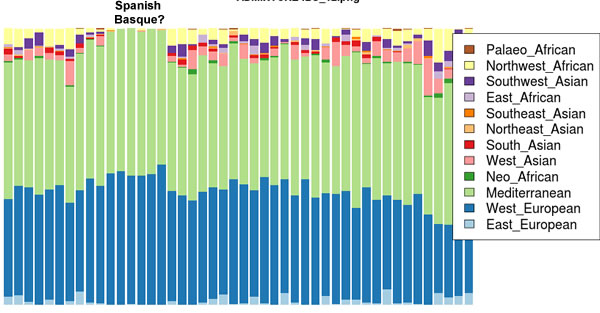 Recall that the Basques were exempt from inspection for "cleanliness of blood", because they were presumed to lack Jewish or Moorish ancestry by virtue of being Basque. It seems that the Spanish IBS sample, like the Behar et al. Spaniards and Portuguese, do have some Moorish genetic imprint. This is not too surprising. The Moriscos might have been expelled in the early 17th century, but not before the majority had converted to Christianity over the centuries (in fact, some of the most virulent anti-Morisco partisans had Moorish ancestry themselves, and were particularly tainted by association with the remaining culturally unassimilated crypto-Muslims). All that being said, I suspect that the "West Asian" ancestry amongst the majority of the Spaniards is not due mostly to the Arab period (when of the majority of the settlers probably were Berbers or Arabicized Berbers), but to population impacts prior to that. By the time of the Roman conquest much of Spain was Celtiberian. I have low confidence in this assertion, but I am coming to believe that the Indo-Europeans brought a mix of East European and West Asian ancestry (or at least those two distinct strands which tend to shake out of ADMIXTURE in a broad array of European samples) to western Europe. On a related note, Wave-of-Advance Models of the Diffusion of the Y Chromosome Haplogroup R1b1b2 in Europe:

Whether or not the spread of agriculture in Europe was accompanied by movements of people is a long-standing question in archeology and anthropology, which has been frequently addressed with the help of population genetic data. Estimates on dates of expansion and geographic origins obtained from genetic data are however sensitive to the calibration of mutation rates and to the mathematical models used to perform inference. For instance, recent data on the Y chromosome haplogroup R1b1b2 (M269) have either suggested a Neolithic origin for European paternal lineages or a more ancient Paleolithic origin depending on the calibration of Y-STR mutation rates. Here we examine the date of expansion and the geographic origin of hgR1b1b2 considering two current estimates of mutation rates in a total of fourteen realistic wave-of-advance models. We report that a range expansion dating to the Paleolithic is unlikely to explain the observed geographical distribution of microsatellite diversity, and that whether the data is informative with respect to the spread of agriculture in Europe depends on the mutation rate assumption in a critical way.

Really I'm waiting for more ancient DNA. These sorts of studies are starting to feel like rewarming cold pizza. Edible, but suboptimal. Next, Phylogeography of a Land Snail Suggests Trans-Mediterranean Neolithic Transport:

Background Fragmented distribution ranges of species with little active dispersal capacity raise the question about their place of origin and the processes and timing of either range fragmentation or dispersal. The peculiar distribution of the land snail Tudorella sulcata s. str. in Southern France, Sardinia and Algeria is such a challenging case. Methodology Statistical phylogeographic analyses with mitochondrial COI and nuclear hsp70 haplotypes were used to answer the questions of the species' origin, sequence and timing of dispersal. The origin of the species was on Sardinia. Starting from there, a first expansion to Algeria and then to France took place. Abiotic and zoochorous dispersal could be excluded by considering the species' life style, leaving only anthropogenic translocation as parsimonious explanation. The geographic expansion could be dated to approximately 8,000 years before present with a 95% confidence interval of 10,000 to 3,000 years before present. Conclusions This period coincides with the Neolithic expansion in the Western Mediterranean, suggesting a role of these settlers as vectors. Our findings thus propose that non-domesticated animals and plants may give hints on the direction and timing of early human expansion routes.

So basically the snail hitched a ride from Sardinia to Algeria to France. I don't think this is that surprising. First, it seems pretty obvious that a lot of the cultural expansion in the prehistoric period did not consist of the fission of villages along a continuous wave of advance, but involved leap-frogging to suitable nuclei from which the populations expanded. Imagine a rising flood where the lowest zones are inundated first, and then the higher peaks. Additionally, we shouldn't presume that these expansion events were without conflict and institutional support. Consider that the expansion of farming across much of southern European Russia and Ukraine could only occur after the state had pacified, expelled, or assimilated, the mobile Turkic populations which were wont to extract unsustainable rents out of isolated and vulnerable peasant populations. Finally, what's up with the strong north-south differentiation across the Mediterranean basin, peaking in the west? It's as if there were two waves of demographic and cultural advance which laid the ground work, and later perturbations haven't disrupted that bedrock. It suggests to me the critical importance of lateral coastal transport in connecting cultural colonies, as opposed to more long distance jumps across the open sea. The latter were probably important for the transport of luxury goods and the exchange of memes, but not so much for the exchange of genes.