First-Aid Snakebite Drug Could Save Thousands of Lives 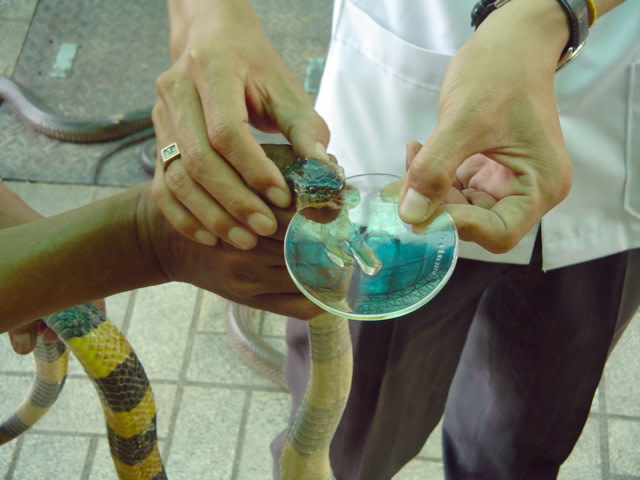 Milking a banded krait for venom. Photo by TheLawleys via Flickr A decade ago, Joe Slowinski of the California Academy of Sciences went into the jungles of Myanmar in search of new species of snakes and other vertebrates. One morning, he groggily reached into a bag of vipers he thought to be harmless and when he pulled his hand out, attached to it was a banded krait – among the most poisonous snakes on the planet. He knew he was in trouble, and to make matters worse, the date was September 11, 2001. He held on for a little more than a day, but with all the chaos back in the US, an emergency evacuation never materialized. He eventually succumbed to the krait’s neurotoxin. Last week, a team led by an Academy doctor reported a new method of delivery for a well-known hospital drug that might have saved Slowinski’s life, had it been available. But more importantly, the travel-friendly nasal spray might someday save some of the estimated 125,000 people across the world who die from snakebites every year.

A few years after Slowinski’s death, the academy brought in Matt Lewin, an emergency room doctor and an expert in wilderness medicine, to look over their safety protocols. Lewin didn’t set out to address snakebites per se but rather to help equip – and sometimes accompany – people going out into the field to hunt down various plants and animals. Lewin – who has an eclectic set of interests, including exotic diseases and zoology – developed a highly mobile and effective first-aid kit that he took into jungles and deserts across the world. One component of the kit was neostigmine, a common hospital drug used to treat, among other things, snakebites. On one such trip, in 2011, he had to leave early from an expedition in the Philippines, so he explained to the team leader how to deliver a shot of neostigmine to a patient suffering from a poisonous snakebite while someone snapped a photo. On the way home he looked at the photo and thought the scientist looked horrified at the idea of sticking one of his colleagues with a needle. “I don’t know if he was actually nervous but that was my impression,” Lewin says. “And I thought, there’s got to be a better way to do this. What if we could just get rid of the needles?”

Most neurotoxins work by attacking the neuromuscular junction – the regions between the nerves and the muscles that trigger the muscles to move when the brain signals them. They do this by blocking an essential neurotransmitter – acetylcholine – from passing from the nerve to the muscle, telling it to move. The result is paralysis, even in the crucial lung muscles. (It was this that killed Slowinski.) A patient in this predicament needs antivenom, a molecule that deactivates the venom directly. Neostigmine cannot do this, but can allow what little acetylcholine is able to get past the venom to move freely. And in an emergency, you need every second. “It’s a race,” says Brett Mensh, a physician and longtime collaborator of Lewin’s. “You get bit by something and you start to make your way towards help and your acetylcholine is dropping, dropping. And it goes down to the point where you stop breathing before you get to the hospital.”

Among the 5 million people bitten by snakes per year, those who die, like Slowinski, are usually far from a hospital. The problem is that neostigmine is a hospital drug and not easy to administer. So Lewin, Mensh, and a few others began looking at a neostigmine nasal spray used decades earlier for a rare neuromuscular disease. What if scientists in the field and rural farmers in the tropics could carry this nasal spray? It could buy them hours, maybe days to get to the hospital alive. But how do you test whether it works? You can’t just shoot people up with snake venom. But Lewin’s friend Phil Bickler chanced upon a novel solution: simulate venom paralysis with a drug used to sedate people going into surgery. So Lewin began to petition his employer, the University of California, San Francisco, for permission to test neostigmine nasal sprays in response to simulated paralysis. In the meantime, following a long tradition of venom researchers like Bill Haast (who tried to build up immunities to venom through self injection), Lewin tinkered with various neostigmine doses on himself. “It’s not necessarily a gentle thing. At some of the doses which I gave to myself … it was quite unpleasant,” Lewin says, somewhat carefully. “I’ve promised my parents I won’t ever experiment on myself again.”

Eventually, the team got permission and ran an experiment, putting a subject under with drugs whose effects resemble snake neurotoxins, and then reviving him. It went better than planned, with the subject reviving in just minutes. The results were published last week in the journal Clinical Case Reports. Although this first paper was just a single subject, it showed the technique was both safe and effective. Since then, the team has wasted no time moving investigations forward. India sees some 50,000 deaths per year due to snake bites, and one hospital in the southern state of Tamil Nadu has treated 650 cases just since 2006, according to Stephen Paul Samuel, a physician and researcher with Trinity College in Dublin who has worked in the region. He brought the team’s nasal spray to the hospital – where huge cobras mate just steps away from its door – and camped out for a month, waiting for a chance to try it. Sure enough, a 50-year-old woman came in paralyzed from a krait bite – a similar snake to the one that killed Slowinski. She was bitten while she slept seven hours previously and should have been dead by then. He started her with antivenom drugs and then later in the day used the spray once every four hours. Samuel says within 30 minutes of the first spritz, the patient improved, and by the next day could be released. Most importantly, he says the spray was easy enough to use that any farmer could do it. “We have to look into designing a product, maybe stock it in the local pharmacies throughout farming areas,” Samuel says. “It’s not going to be a substitute for antivenom but it will buy time. It should save a lot of lives.”

Erik Vance is a science writer based in Mexico City. He writes about the environment, brain science, and occasionally hamster sex. Read more of his writing at the Last Word on Nothing. And for more on Lewin and his work, look for a forthcoming feature in Discover Magazine.