In this study, we analysed almost 250,000 SNPs from a total of 945 samples from Eastern and Western Finland, Sweden, Northern Germany and Great Britain complemented with HapMap data. Small but statistically significant differences were observed between the European populations...The latter indicated the existence of a relatively strong autosomal substructure within the country, similar to that observed earlier with smaller numbers of markers. The Germans and British were less differentiated than the Swedes, Western Finns and especially the Eastern Finns who also showed other signs of genetic drift. This is likely caused by the later founding of the northern populations, together with subsequent founder and bottleneck effects, and a smaller population size. Furthermore, our data suggest a small eastern contribution among the Finns, consistent with the historical and linguistic background of the population. 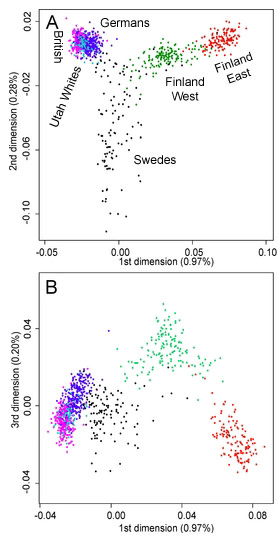 The figure to the left (adapted from figure 2) is a chart showing the three largest components of variation within the genetic data. Nothing is very surprising here, the eastern Finns are more distant from other Europeans than the western Finns; a prediction one would make from plain geography. As the authors note, there are plenty of "common sense" reasons why you see the particular patterns discernible. Fenno-Scandinavia was settled from the south within the last 10,000 years, so founder effects would be more operative among these populations (this trend exists on a pan-European scale from south to north). Additionally, the ecological context of northern Europe tends to result low populations, which increase the power of genetic drift to fix rare variants. Finland in particular is marginally arable, while even Sweden exhibited a relatively late adoption of agriculture. Migration is a population genetic parameter which works against drift to reduce between population barriers, but water barriers are often extremely effective in reducing gene flow from deme to deme. Though it is notable that the British samples are so close to Germans; I think the authors are right to point to the likely historical origins of the Finnic peoples as explaining the distinctiveness as much as geography or ecology. The figure below (adapted from supplemental figure 3) shows the relationship between European populations and non-European HapMap populations. No surprise that Europeans cluster together, but again, the eastern Finns are where you would expect them to be. 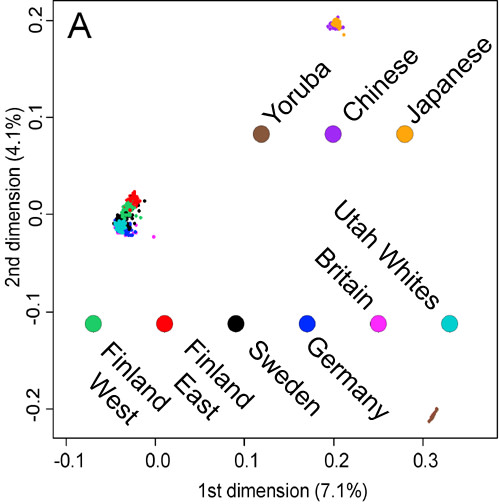