Population structure can provide novel insight into the human past and recognizing and correcting for such stratification is a practical concern in gene mapping by many association methodologies. We investigate these patterns, primarily through principal component (PC) analysis of whole genome SNP polymorphism, in 2099 individuals from populations of Northern European origin (Ireland, UK, Netherlands, Denmark, Sweden, Finland, Australia and HapMap European-American). The major trends (PC1 and PC2) demonstrate an ability to detect geographic substructure, even over a small area like the British Isles, and this information can then be applied to finely dissect the ancestry of the European-Australian and -American samples. They simultaneously point to the importance of considering population stratification in what might be considered a small homogenous region. There is evidence from FST based analysis of genic and non-genic SNPs that differential positive selection has operated across these populations despite their short divergence time and relatively similar geographic and environmental range. The pressure appears to have been focused on genes involved in immunity, perhaps reflecting response to infectious disease epidemic. Such an event may explain a striking selective sweep centered on the rs2508049-G allele, close to HLA-G gene on chromosome 6. Evidence of the sweep extends over 8Mb/3.5cM region. Overall the results illustrate the power of dense genotype and sample data to explore regional population variation, the events that have crafted it and their implications in both explaining disease prevalence and mapping these genes by association

The paper is another genetic map of Europe. In other words it helps map out the relationships between different historical groups within Europe, and illustrates the influence of geography in shaping genetic variation by constraining or enabling gene flow from point to point. Secondly, it scratches the surface on the effect of selection on further sculpting genetic variation on the margins. Here's the Structure: 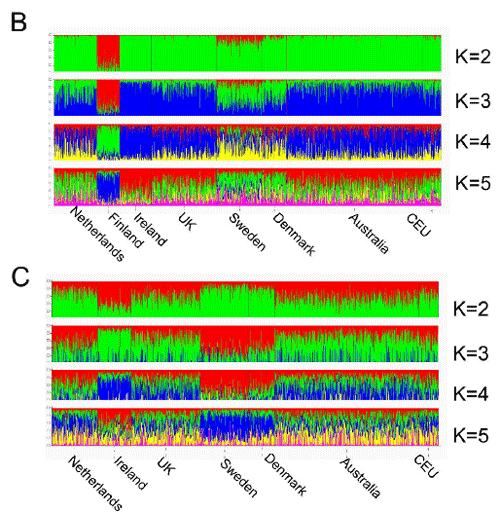 CEU = a Utah white sample. Now without the Finns:

We examined whole genome polymorphism for several populations either from, or largely descendent from, Northern Europe. In common with recent similar studies, we demonstrated it is possible to discern clear differences amongst individuals from very closely related populations and even to observe stratification within the same population. The nature and relative importance/order of PCs will, of course, be affected by the populations and individuals included. Within our data the distinctive position of Finland in PC1 may be the consequence of migrational contact with Northern Asians or admixture from the Saami population, who are known European genetic outliers. The differentiation apparent within Finland along a North/East to South/West axis is consistent with such a genetic diffusion. ... While the genic FST test is collective evidence for positive selection, our study identified one specific example of a probable selective event/sweep around the rs2508049-G allele in the HLA region of chromosome 6. The exceptionally long span of haplotype homozygosity suggests relatively recent and/or intense selection across all Northern Europeans (although we cannot distinguish whether this was before or after population divergence). Unusual patterns of genetic variation within this region are well established and it has likely been affected by a complex palimpsest of processes that seem to include positive and balancing selection....

No surprise that the signal of selection they zeroed in on involved the immune system. In any case, I wonder if they could figure out if Finnish uniqueness is due to an ancient admixture event just like they did with Uyghurs? Related:Finns as European outliers, Estonians are not like Finns and The genetics of Fenno-Scandinavia.