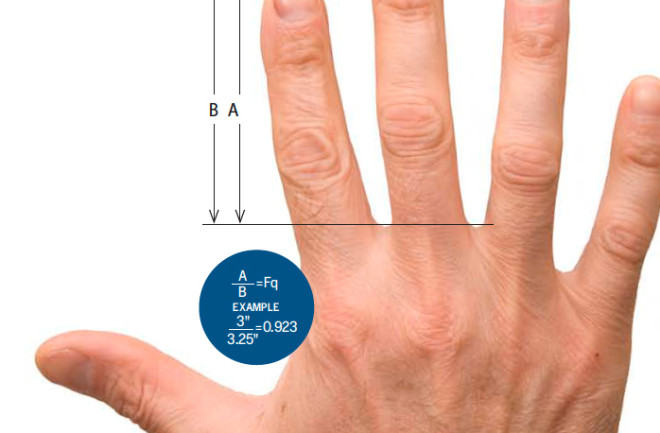 Researchers have discovered that a quick study of the hands — more specifically, the lengths of the index and ring fingers — can tell a lot about a person’s personality and risk of disease. Of course, your digits don’t actually control these issues; it’s closer to the other way around.

In boys, “during fetal development there’s a surge in testosterone in the middle of the second trimester” that seems to influence future health and behavior, says Pete Hurd, a neuroscientist at the University of Alberta. One easy-to-spot result of this flood of testosterone: a ring finger that’s significantly longer than the index finger.

Scientists are not at the point where they can factor in finger length to arrive at a diagnosis, but they’ve gathered evidence that shows how this prenatal hormone imbalance can affect a person for life, from increasing or decreasing your risk of certain diseases, to predicting how easily you get lost or lose your temper.

Researchers continue to study what sparks these hormonal changes and have begun looking at environmental chemical exposure, stress levels and diet during pregnancy.

How Do You Measure Up?

The shorter your index finger, the sharper your tongue: In both men and women, a lower Fq can predict more verbal sparring.

A greater surge of prenatal testosterone can be an indicator of high levels of achievement in sports, as well as a mental toughness in athletics. In one study, college varsity athletes (male and female) were found to have shorter index fingers than other students.

In women, a more masculine digit ratio tends to predict a better sense of direction, backing up past research that found men tend to have better spatial cognition than women.

Men who experience a higher surge of prenatal testosterone, and thus have longer ring fingers, tend to be risk takers. One example: The most successful financial traders tend to have the longest fourth fingers. These behavior patterns seem to apply only to men.

An index finger that’s shorter than the ring finger can be a sign of knee osteoarthritis risk, particularly in women, compared with people whose fingers are equal lengths, or who have a longer index finger.

A high digit ratio — those with very little difference between the index and ring finger, or with a longer index finger — was found among men with oral cancer, compared with men with pre-cancerous oral lesions or no lesions, according to one all-male study.

Men with long index fingers and shorter ring fingers have a 33 percent reduced risk of prostate cancer. If they’re younger than 60, the risk is even less — 87 percent.

Editor's Note: This article was amended on April 11 to reflect the following correction: Fq>1 is associated with an increased, not reduced, risk of oral cancer.