The swine flu pandemic is well under way. With the WHO citing almost 60,000 laboratory-confirmed cases at the time of writing, the race is truly on to understand more about the virus. Now, two new studies have painted a fresh but partly contradictory picture about two of the virus's most important aspects - its infectivity (its ability to spread from host to host) and its virulence (its ability to cause disease in a host). These two traits will largely determine the threat that the virus poses, especially in relation to more familiar garden varieties of seasonal flu.

Both groups, one based in the US and the other in the Netherlands, tested the virus's behaviour in ferrets. These animals are affected by flu viruses in much the same way as humans, mimicking both the severity of our infections and ease of our viral transmission.

Both studies found that the new swine flu virus takes a slightly greater toll on its host's health than the usual strains of seasonal flu. These strains limit their infections to a ferret's nasal passages but the new swine flu virus makes its way into the lungs too. The Americans, led by Taronna Maines at the CDC, even found traces of the virus in the ferrets' gut.

This helps to explain the unusual profile of symptoms associated with swine flu. Most patients experience typical mild flu symptoms but an unusually large proportion (around 40% or so) have also suffered from unusual symptoms like vomiting and diarrhoea. Some have also been hospitalised due to severe pneumonia and respiratory failure, occasionally with fatal consequences. A flu virus that is unusually good at infecting the lungs and gut certainly make sense of these cases.

However, when it came to the virus's ability to spread, the two research teams disagree. The Americans found that swine flu is less easily transmitted from ferret to ferret than other seasonal viruses of the same H1N1 subtype. However, the Dutch team, led by Vincent Munster from the Erasmus Medical Center, found that the new virus transmits just as easily as its seasonal counterparts.

Maines's team compared three samples of the swine flu taken from California, Mexico and Texas, with a seasonal flu virus from Brisbane, while Munster's group focused on two Dutch swine flu samples, including one taken from the first laboratory-confirmed case in the Netherlands. Both teams inoculated ferrets with nasal swabs and found they found high levels of all five swine flu viruses in the animals' noses after just a day.

In both studies, the swine flu carriers lost more weight compared to those infected with seasonal flu. They had much higher levels of virus in their noses, throats and lungs and they took two days longer to recover. The Dutch team found that the virus reproduced in the ferrets' upper airways - their trachea, bronchi and bronchioles - while the Americans found traces in the animals' intestines.

All in all, the evidence points to a virus that causes more severe and extensive disease than its more familiar counterparts. Nonetheless, it's still relatively mild and comes nowhere near to the lethal power of the previous 1918 H1N1 pandemic, nor indeed the H5N1 bird flu that so worried us a few years back.

On the subject of transmission, the two teams found different results. Both housed infected animals with healthy ones to test the virus's ability to spread from host to host. Maines's group found that if the healthy partner was housed in the same cage, it always fell ill too after just a day. But if the animals were housed in separate cages connected only by air-holes, just two out of three healthy ferrets became infected and only after a few days. 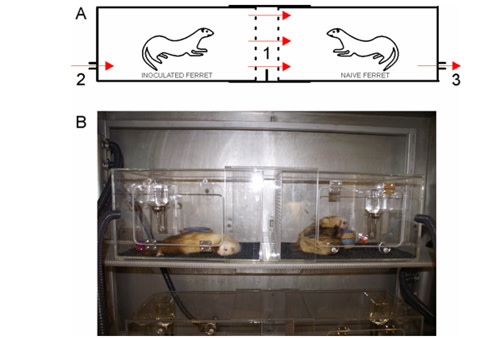 This suggests that, compared to the seasonal Brisbane strain, the three swine-origin viruses are less capable of spreading through respiratory droplets - airborne particles of fluid and dust sneezed or coughed out by sick individuals. Indeed, the ferrets infected with swine flu sneezed less frequently than their peers who were sick with the more common strain.

But Munster's team found something different. They did the same experiment, housing four pairs of infected and healthy ferrets in separate cages connected by holes. In all four cases, the naive animals fell ill within two days. They concluded that the swine flu virus is just as good as seasonal strains at spreading via respiratory droplets. It's an effective competitor, especially since immunity against seasonal strains seems to do nothing to prevent infection from the new virus.

The American group backed up their result with molecular research, which showed that compared to seasonal strains, the pandemic virus sticks less efficiently to docking molecules on its target cells. The study also used many more ferrets than the four pairs used by Munster.

Regardless of their differences, both teams agree that the ferret models will be very useful in studying how the virus changes and adapts to its new host in the coming years. In terms of infectiveness, the viruses responsible for all three of the 20^th century's flu pandemics contained a single change in their PB2 genes, which allowed them to reproduce efficiently at the cooler climates of our airways. This mutation was critical to their ability to spread effectively and so far, the most recent pandemic virus lacks it. Maines says that monitoring for changes to this gene will be important in the future.

Munster also warns us not to be lulled into false sense of security by the fact that the current virus isn't as virulent as past pandemics. For a start, his samples were taken from mild cases of the disease and it's possible that more virulent strains could arise in the future.

The virus predominantly infects the nose and throat, which could put it into contact with other seasonal H1N1 and H3N2 strains, opening the door for genetic mingling. Its presence further down the airways is more worrying, for it raises the odds that it could swap genes with H5N1 bird flu viruses, which also colonise these deeper tissues. If and when this happens, the ferret models should once again be useful in looking for adaptive changes in the virus.

Images: Ferrets in cages from Science/AAAS; others from Wikipedia